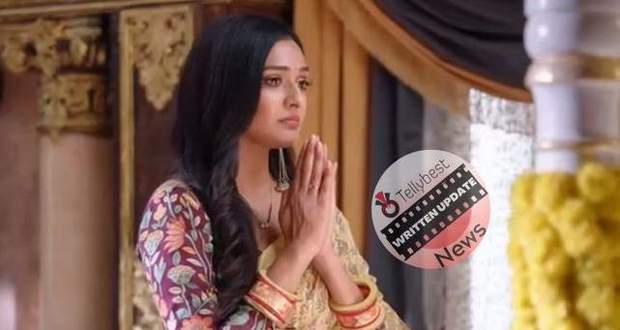 Today's Bhagya Lakshmi 30th September 2022 episode starts with Rishi beating the goon black and blue and pressing the goon’s head on the bench to know about his brother.

Meanwhile, the goon yells that his younger brother is in hospital due to poisonous food.

Hearing this, Rishi announces that neither he nor Lakshmi has not done anything like this.

Looking at Rishi’s eyes, the goon realizes Rishi is telling the truth and walks away.

On the other hand, while Malishka is giving money to the stranger and ordering her to leave, Balwinder approaches them and declares that he cheated on Malishka so she is angry.

After the stranger walks away, furious Malishka scolds Balwinder for calling himself her husband.

In the meantime, in the office, Lakshmi reminds Mukesh that Rishi has done a lot of things for him so he should help Rishi.

Further, Ayush also adds that Lakshmi has told the truth in court but Mukesh announces that he does not want to get involved again.

After Mukesh walks away, Lakshmi urges Ayush to question Mukesh again as she is sure Mukesh knows something.

Elsewhere, Shalu notices Balwinder and Malishka in the car and gets stunned.

Later, at home, Bani starts teasing Shalu about Ayush and Shalu starts blushing like a tomato.

On the other hand, in the Oberoi mansion, while Virendra and Mr. Basu are discussing Rishi’s case, Karishma approaches them and starts trash-talking about Lakshmi.

After Mr. Basu leaves, Virendra reminds Karishma that Lakshmi has saved Rishi a lot of times so she should respect her but Karishma walks away like an angry kid.

In the meantime, near the parking lot, Lakshmi again tries to change Mukesh’s mind but scared Mukesh denies it and runs away.

After Mukesh runs away, Lakshmi announces that now she is sure Mukesh is hiding something.

She even states there is someone spying on them right now.

On the other hand, during the car ride, Malishka tells Balwinder that she is not sure if Mukesh will stay mute as he is Rishi’s servant.

© Copyright tellybest.com, 2022, 2023. All Rights Reserved. Unauthorized use and/or duplication of any material from tellybest.com without written permission is strictly prohibited.
Cached Saved on: Monday 21st of November 2022 06:50:48 AMCached Disp on: Wednesday 7th of December 2022 04:05:16 PM