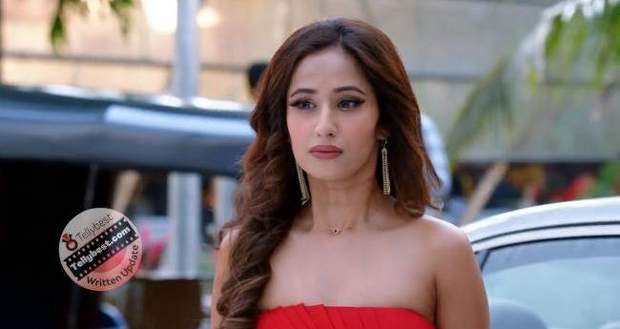 Today's Bhagya Lakshmi 31st December 2022 episode starts with Malishka questioning Rishi if he will marry her or not.

When Rishi tells Malishka that he and Lakshmi’s relationship is unbreakable, Malishka asks him what about the moment they spent together.

Pointing towards Lakshmi’s picture, Malishka orders Rishi to move on and tell everyone in the hall that he will marry her.

While Rishi looks at Malishka with shame, Malishka continues threatening Rishi that if their closeness was not love then it was rape and he should announce it in front of his parents.

She even accuses Rishi of using her for physical needs with crocodile tears in her eyes but Rishi just stands there in shock.

Later, when Malishka arrives in the hall, she starts throwing things around in anger and curses Lakshmi.

Arriving there just in time, Sonal orders Malishka to calm down but Malishka announces she wants Rishi to do what she wants.

After Malishka storms away, Sonal yells at Malishka for always thinking about suicide.

Meanwhile, in Rishi’s room, Rishi is feeling sorry for himself as Lakshmi is not here to cheer his mood.

Recalling how Lakshmi used to make him laugh, a small smile appears on Rishi’s face and he tells himself that he is missing Lakshmi very much.

Neelam enters Rishi’s room just then and puts her hand on Rishi’s shoulder to urge him to say something.

Neelam further informs Rishi that Lakshmi is out of his life now so he should be happy and even if Rishi does not want, he has to marry Malishka.

Hearing this, Rishi tells Neelam that he loves Malishka but this marriage does not sound right and Neelam looks at him sternly.

In reply, Neelam announces that she will not let Lakshmi return to Rishi’s life and Rishi has to do what she says.

After Neelam walks away, Rishi tells himself he will do what he wants without listening to anyone.

He even decides to leave the house.

In the meantime, in Bajwa's house, Shalu breaks the news of Rishi-Malishka’s marriage to Lakshmi who just stares at her with a poker face.

Shalu questions Lakshmi if she is not hurt to which Lakshmi replies that she is not with Rishi anymore.

Shalu announces that if Lakshmi does not go she will talk to Rishi but Lakshmi orders her not to do it.

Later, in the Oberoi mansion, Rishi is packing his bags when he decides to write a letter to the family.

On the one hand, Rishi is writing the letter; on the other hand, Lakshmi is sobbing silently recalling her sweet memories with Rishi in the kitchen.

Meanwhile, in Balwinder’s home, Balwinder informs Guddu that he will not leave Lakshmi any choice except to marry him while Guddu looks unconvinced.

On the other hand, while Rishi is walking in the hall, Devika notices him and calls him a thief.

The jug that Devika was holding breaks into pieces causing Rishi to look up and he orders Devika to stay silent.

He even informs Devika that he is leaving so he does not have to marry Malishka but before he can open the door, Neelam switches on the lights and accuses Lakshmi of making Rishi do this.

Rishi however tells Neelam that he is doing this because he does not want to marry Malishka.

© Copyright tellybest.com, 2022, 2023. All Rights Reserved. Unauthorized use and/or duplication of any material from tellybest.com without written permission is strictly prohibited.
Cached Saved on: Wednesday 25th of January 2023 09:01:02 AMCached Disp on: Tuesday 31st of January 2023 08:09:30 PM