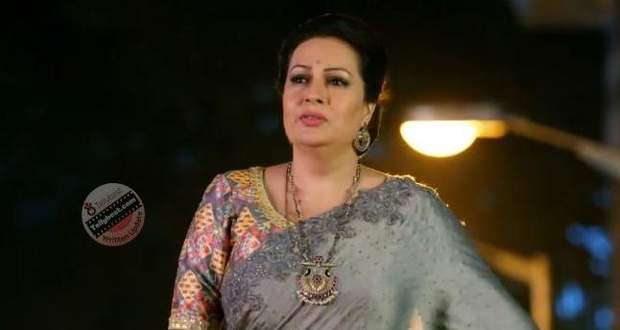 In the meantime, Malishka’s mother wakes Malishka to get ready so that she can be ready to welcome Sonal.

Later, Malishka apologises to Kiran for the last day's mistake while Kiran asks her to promise to never repeat her mistake.

After a while, Sonal comes to Malishka’s house and takes out a photo from her purse.

Just then Malishka and Kiran welcome her into the house.

Later, Malishka tells her that Rishi is her problem who has married another woman.

However, Malishka tells her that it is Lakshmi who is her real problem.

Sonal laughs heartily at Malishka calling Lakshmi a problem and shows her a picture.

Seeing the photograph, Malishka looks shocked and asks Sonal how she knows Lakshmi, she is her friend.

Meanwhile, Virendra gets a call from the hotel about a meeting with Mr Almeda and tells him that they have requested to meet Lakshmi in person.

Virendra sounds surprised and tells him that he will personally inform the Almedas that they can meet Lakshmi.

Sonal tells her about her impromptu meeting with Lakshmi where she finds her helping a poor woman.

She tells her that she recognised Rishi’s car and asks her about her identity.

Sonal tells her that Lakshmi is a simple villager and is not worth the time of the day.

However, Malishka tells her not to take Lakshmi lightly as Lakshmi is deeper from the inside.

Malishka gets motivated hearing Sonal and tells her that if she got her married to Rishi then she will give her anything she likes.

Sonal tells her that if she succeeded in making Lakshmi go away from her life then she can give her Rishi as a gift.

Malishka looks shocked at Sonal’s demand but Sonal laughs out loud giving her the impression of a joke.

Later, Sonal and Malishka come to Oberoi's house and trick Rishi into giving her a wish.

After introducing Lakshmi to Sonal, Rishi asks Sonal what she wants while Sonal tells him that she wants him to kiss her.

However, she is pleased when Sonal tells Rishi that he has always belonged to Malishka.

Later, Neelam and others join them at the breakfast table.

After a while, Aayush also comes to the table asking for breakfast options.

He is pleased to see Sonal and offers Lakshmi help.

Aayush also praises Lakshmi for efficiently taking care of the house while Karishma feels offended and tells him that the house was running efficiently before Lakshmi as well and they were happy then.

© Copyright tellybest.com, 2022, 2023. All Rights Reserved. Unauthorized use and/or duplication of any material from tellybest.com without written permission is strictly prohibited.
Cached Saved on: Wednesday 25th of January 2023 05:54:31 PMCached Disp on: Tuesday 31st of January 2023 06:36:48 PM