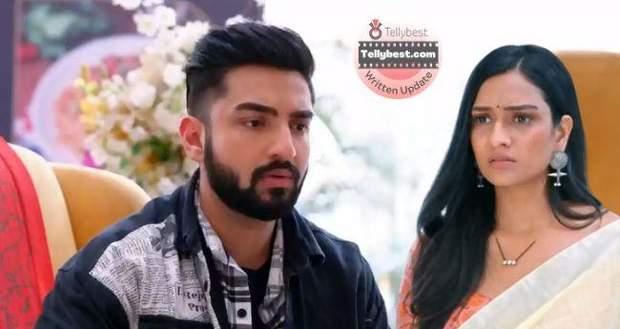 Today's Bhagya Lakshmi 3rd January 2023 episode starts with Shalu asking Ayush why neither Lakshmi nor Rishi is calling them to relay the good news they are expecting.

Ayush assures Shalu that Lakshmi and Rishi are probably busy with each other as they have many things to resolve between them.

Shalu gets happy to think that Lakshmi and Rishi’s relationship will get mended by their talking with each other.

Meanwhile, Karishma comes to Neelam while she says that they have to hurry with the arrangements of Rishi and Malishka’s marriage.

Karishma gets happy to hear Neelam and asks her why Rishi is not happy with their decision as he loves Malishka.

Neelam says that Rishi will understand soon and thank them later for initiating his marriage with Malishka.

On the other hand, Rano catches Balwinder trying to sneak glances at Lakshmi inside the house and bursts out at him.

Balwinder asks Rano to let Lakshmi marry him as they were supposed to in the past but could not fulfill that.

Rano says that Balwinder has no class and is a donkey with whom she will not let Lakshmi marry ever.

Balwinder tries to frighten Rano by saying that Neha would not be able to get married as Lakshmi is freshly divorced.

Rano pulls Balwinder’s hair painfully and asks him to get out from the front of her house.

Lakshmi welcomes Rano inside once she returns and gets worried as she hears her talking about panditji coming to their house.

At the same time, Malishka intentionally falls on Rishi which makes him irritated and he asks Malishka not to walk when she is hurt.

Malishka asks Rishi why he is releasing his anger on her when she is trying to comfort him.

Rishi says that he was supposed to meet Lakshmi but she did not show up which has turned him upset.

Malishka tells Rishi that Lakshmi does not want to meet him and has broken their marriage.

However, Rishi says that he still thinks of Lakshmi as his wife but gets silent as Malishka asks him if he loves Lakshmi.

Rishi says that he considers Lakshmi a friend which makes Malishka happy and she tells Rishi that he loves her only and will marry her.

As Rishi asks Malishka to stop talking about marriage, Malishka blames Rishi for using her as his pleasure reliever and throwing her away.

Malishka drinks poison making Rishi shocked and faints in his arms after which both Sonal and Kiran also come running.

The doctor comes and gives the antidote as Sonal already knows that the poison is not a harmful one.

Kiran warns Rishi that she will not forgive him if something happens to Malishka.

Meanwhile, Lakshmi discovers that Rano has selected a match for Neha and congratulates her in relief.

After Shalu returns, Lakshmi scolds her for trying to send her to Rishi and says that she and Rishi can never get together in the future.

© Copyright tellybest.com, 2022, 2023. All Rights Reserved. Unauthorized use and/or duplication of any material from tellybest.com without written permission is strictly prohibited.
Cached Saved on: Wednesday 25th of January 2023 07:00:53 PMCached Disp on: Thursday 9th of February 2023 05:29:39 AM