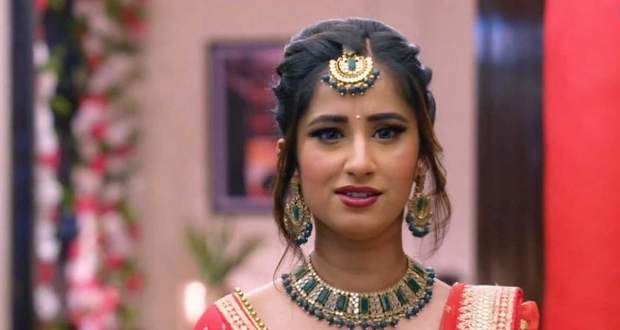 Today's Bhagya Lakshmi 3rd June 2022 episode starts with Malishks arrogantly telling Lakshmi that she will make her life a living hell in the next three months.

To this, Lakshmi replies that Rishi is only her and  Malishka can not do anything.

Meanwhile, in the Oberoi mansion, Karishma tries to push Shalu away but Shalu stops her and later apologizes for creating inconvenience.

However, she also says that she is not sorry for doing what she did.

Dadi then faints which shifts everyone's attention from Shalu.

On the other hand, Malishka challenges Lakshmi to a battle.

Though Lakshmi agrees, she tells her that only death can make them apart.

Hearing this, Malishka gets angry and walks away from there.

While Malishka is entering the house she notices Shalu and starts scolding her for ruining her engagement.

Malishks then tells Shalu that Lakshmi will face the consideration of Shalu's actions.

Hearing this, Shalu tells her that she will stand as a shield in front of Lakshmi.

Later while Lakshmi is entering the house she collides with Shalu and hugs her tight for saving her marriage.

On the other hand, Neelam and Kiran are discussing Lakshmi's behaviour when Malishka enters the room.

She tells them that they need to make Lakshmi pay for her behaviour.

However, Rishi overhears them and enters the room and calms Malishka by saying that he will always be hers.

Hearing this, Malishka gets satisfied and urges him to take action against Lakshmi.

Although Rishi agrees, he is sceptical about it.

On the other hand, in Bajwa house, Neha is sarcastically telling everyone that Lakshmi has become that person who is rejected by everyone.

However, Shalu hears it and asks Neha if Balwinder was in the Oberoi mansion and if he is the one behind the ring stealing.

Shalu and Banni ask Neha how she knew everything that happened in the Oberoi Mansion.

When Rano asks Neha, she reveals that Balwinder loves Lakshmi and he was there to break Rishi and mistakenly Lakshmi's engagement.

Meanwhile, Lakshmi remembers the judge's words while she watches Rishi hugging Malishka from her balcony while Malishka stays close to Rishi and kisses him to make Lakshmi jealous.