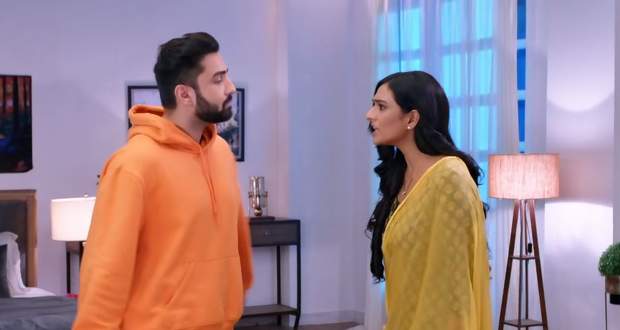 Today's Bhagya Lakshmi 3rd May 2022 episode starts with the officer accusing Rishi and Lakshmi being illegally spending the night together.

This makes Rishi furious and he warns the officer against calling ill about his wife Lakshmi.

Further, Rishi and Lakshmi continue to keep saying that they are a married couple.

However, the officers lock them up in the jail even after Rishi refuses to let his wife Lakshmi stay in such a jail because he couldn't prove that they are married.

Rishi and Lakshmi continue their argument in the jail.

The prisoners clearly see the love between them but they refuse the same.

In the same time, Malishka arrives at the police station and claims to be Rishi's wife.

When the police officer asks for proof, Malishka calls Neelam to request the pictures of Malishka and Rishi's engagement pictures which happened before he got married to Lakshmi.

In desperation, Malishka reveals that Rishi is in jail.

Malishka walks out of the police station and finds Kiran awake.

Finding herself at the police station, Kiran asks Malishka what's going on.

Malishka says that she didn't want anything to happen between Rishi and Lakshmi for which she filed a complaint against Rishi with Lakshmi's name.

Kiran agrees to help her but she finds out that Lakshmi is also in jail with Rishi.

Meanwhile, seeing the hidden love in Rishi and Lakshmi's fights, a lady officer tells them that she hopes they stay in love always.

Later, Malishka continues to misbehave with the police officer because he refuses to believe that she is Rishi's wife.