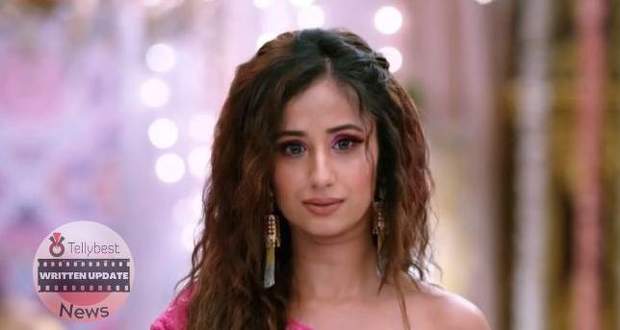 Today's Bhagya Lakshmi 3rd November 2022 episode starts with Rishi telling Lakshmi not to keep the fast for him.

Soniya enters the room at the same time and calls Lakshmi dramatic.

Rishi however screams that he trusts Lakshmi while Soniya continues her allegations against Lakshmi.

Malishka enters the room and announces that this thread will save Rishi from Lakshmi and bad omens.

Rishi denies wearing it as he believes Lakshmi and he further announces that when he was inside the Ravan, Lakshmi saved him not this thread.

Turning to Lakshmi, Rishi assures Lakshmi that he will never doubt her but Malishka and Soniya yell that Lakshmi has blindfolded Rishi.

Rishi then orders Soniya and Malishka to leave the room quietly.

Soniya leaves but Malishka refuses to leave till Rishi wears the thread.

She further accuses Lakshmi of brainwashing Rishi but Rishi drags her away furiously.

After they walk away, Lakshmi blames herself for Rishi’s anger and hopes Rishi does not get into a fight with Malishka.

On the other hand, Harleen announces that everyone always blames Lakshmi for everything but Neelam informs her that since Lakshmi has arrived in the Oberoi mansion, everyone is fighting constantly with each other.

Harleen scoffs after hearing this and Soniya enters the room at the same time while muttering under her breath that Rishi is changed.

Neelam also announces that she will not give Lakshmi any more chance but before Neelam can leave the room, Harleen blocks her path.

Neelam however questions Harleen about how she can take Lakshmi’s side instead of hers but Harleen replies she supports the truth.

With tears in her eyes, Neelam orders Harleen to choose between her and Lakshmi.

On the other hand, Rishi and Malishka get into an argument about Lakshmi.

Rishi orders Malishka to stay away from Lakshmi but Malishka announces that cheap Lakshmi has changed Rishi.

She further questions Rishi if he loves Lakshmi while grabbing his collar aggressively.

Looking at Rishi’s silence, Malishka orders him to accept it.

Meanwhile, Neelam thinks that she needs to walk away and Harleen also steps aside as she wants both daughters-in-law in her house.

Elsewhere in the room, Rishi screams in anger that Malishka is crossing her limits and right now he is someone's husband so he needs to protect Lakshmi’s respect.

He even orders Malishka not to come between him and Lakshmi today.

Malishka however challenges Rishi on what he will do if she tries and Rishi announces he will lock Malishka inside the room.

After furious Rishi walks away, Malishka’s eyes fall on passing by Lakshmi and questions Lakshmi about what she has done to Rishi.

She even calls Lakshmi a zero but Lakshmi announces that Rishi is her husband so Malishka should maintain her distance.

Further, Lakshmi adds that no one can separate her from Rishi but Malishka announces that soon she will be Rishi’s wife and will wear the mangalsutra.

With a scoff, Lakshmi orders Malishka to live in present, and right now this mangalsutra belongs to her.

© Copyright tellybest.com, 2022, 2023. All Rights Reserved. Unauthorized use and/or duplication of any material from tellybest.com without written permission is strictly prohibited.
Cached Saved on: Monday 21st of November 2022 03:04:40 AMCached Disp on: Sunday 4th of December 2022 11:44:48 PM