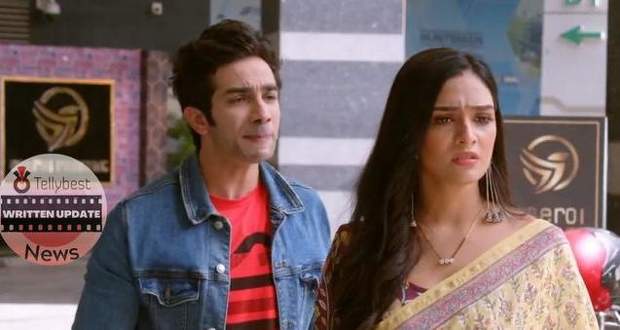 Today's Bhagya Lakshmi 3rd October 2022 episode starts with Neelam telling Virendra that she has something to talk to him about and leaves with Karishma.

Meanwhile, Harleen tells Virendra that nothing can happen till the curtain of Lakshmi being unlucky is lifted from Neelam's eyes.

Later, Neelam asks Virendra if Rishi will be released today while Virendra asks if she's asking him seriously or taunting him.

They both get into an argument while Virendra tries to end it by saying that he is trying all he can to get Rishi out of jail.

Neelam says that their son is naive and still innocent while telling Virendra that Rishi does not deserve to be in jail.

Virendra says that he has hired a team of lawyers and that Rishi will be out soon.

However, Neelam gives him an ultimatum saying that Dussehra will not be celebrated if Rishi does not get out of jail in two days.

Back at the hotel, Lakshmi excitedly tells Aayush that the kitchen has cameras which they can use to get the footage and find out the real culprit.

Later, Neelam goes to meet Rishi in jail and is disgusted by the environment.

Rishi comes there and tries to hug her while Neelam goes away from him and asks him if he would tell the truth to the court that he lied to save Lakshmi.

However, Rishi explains to Neelam that he has learned to be wise from her and calmly tells her that he cannot let both her or Lakshmi down.

Hearing Rishi's words, Neelam sheds a tear and says that her son has grown up.

Neelam tells Rishi that she bore him in her womb for nine months and now she is seeing him make difference between life and life partner.

Rishi manages to convince Neelam to not be upset by him or his actions and hugs her as she sheds a few tears emotionally.

Neelam requests Rishi to return home for the occasion of Dusshera and tells him to make it happen while he agrees.

Meanwhile, Lakshmi and Aayush talk to the security footage manager and he tells them that he will get the footage by tomorrow.

Later, Lakshmi and Aayush go to meet Rishi while Aayush closes his eyes when Rishi and Lakshmi hug.

Further, Lakshmi and Aayush tell him about the CCTV camera and state that they can find out the truth from the footage.

© Copyright tellybest.com, 2022, 2023. All Rights Reserved. Unauthorized use and/or duplication of any material from tellybest.com without written permission is strictly prohibited.
Cached Saved on: Monday 21st of November 2022 08:26:44 PMCached Disp on: Tuesday 6th of December 2022 01:21:09 PM