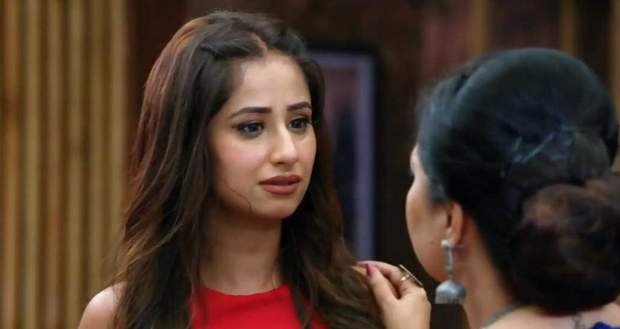 Today's Bhagya Lakshmi 4th August 2022 episode starts with Kiran telling Malishka to not worry if Lakshmi dies or not while she worries that it will become a police case.

However, Kiran tells her that she will not make any mistakes and hugs Malishka.

Meanwhile, at the police station, Durga Devi beats up a drunkard and tells her constables to do research before bringing the people to her.

Neelam calls Durga to ask about Balwinder while Durga tells her to not worry about it since she is coming to the Oberoi house the next day.

However, Neelam doesn't want Durga to come and tells her that they are hosting a puja the next day but Durga self invites herself which worries her.

On the other side of the city, someone knocks on Guddu's door and Balwinder rushes to wear the saree while telling his friend to be confident and do good acting.

Karishma is about to stop them but gets stopped by Biji telling her that she doesn't have any right to.

Later, Virendra sits in the room recalling Biji telling him that Lakshmi hasn't stopped preparing for Bauji's birthday since she heard about it.

Neelam comes there and asks him what he's worried about but gets angry when Virendra states that he was thinking about Lakshmi.

Virendra supports the thought of Lakshmi being the luck of the family which angers Neelam.

She tells him that he was wrong in judging Lakshmi before and tells him to not make that mistake again.

Elsewhere, Kiran enters the house of Guddu in demands to know Balwinder's location.

Balwinder reveals himself and starts reprimanding Kiran and Malishka for putting him in this situation.

However, Kiran tells him that she will give him so much money that he won't have to do any more work and convinces him to do work for her again.

Neelam notices Rishi coming and tells Lakshmi that she will get her out of the house at any cost.

At Guddu's house, Kiran tells her plan to Balwinder and leaves after which Guddu tries to convince Balwinder to not get tangled up with Malishka and Kiran's plans anymore.

Meanwhile, Neelam blames Lakshmi for all the changes happening in the family and leaves making Lakshmi sad.