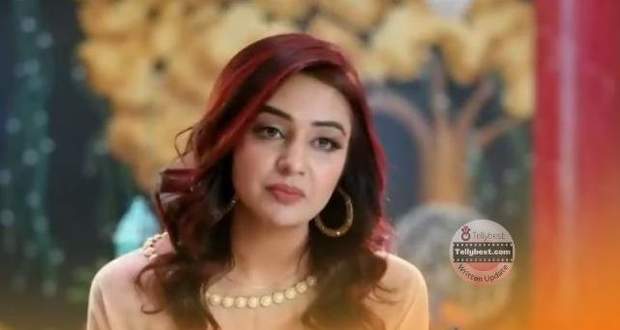 He further announces that he has organized a party for the client today while Neelam questions who will make arrangements and Virendra announces Lakshmi will do it.

Karishma however tells Virendra that it will be better if Malishka takes responsibility after what Lakshmi did last time.

Turning toward Malishka, Karishma excitedly asks Malishka if she can handle this, and Malishka announces she can do it better.

Ayush then sarcastically remarks that Malishka will not be able to find anything in the kitchen so Lakshmi is the only one who can handle this while Malishka glares at him.

Later, while Lakshmi is busy working in the kitchen, Rishi arrives there to apologize but when Lakshmi does not respond, Rishi apologizes to a vegetable.

Lakshmi then throws water at Rishi by mistake who starts smiling and seeing Lakshmi’s happy face, Rishi smiles too.

Meanwhile, Ayush who is passing by the kitchen notices Rishi and Lakshmi in the kitchen and his face lights up.

He even takes their picture together.

On the other hand, while Malishka is feeling frustrated about Lakshmi slowly becoming everyone’s favorite, Sonal enters the room and calls Lakshmi an easy target.

She even tells Malishka that everyone just considers Lakshmi a servant but Malishka rolls her eyes.

When Malishka announces that soon Lakshmi will rule the Oberoi mansion, Sonal promises her that she will make Lakshmi give Malishka her Rishi back.

Meanwhile, Karishma is thinking that innocent Malishka will get her Rishi back since Sonal is here and not even Rishi will be able to resist Malishka anymore.

Arriving in Malishka’s room, Karishma yells that Malishka should look happy since she is trying everything to separate Lakshmi and Rishi.

Hearing this, Malishka gets flashbacks of her and Rishi’s conversation and desperately tells Karishma that she can even die to get Rishi.

Karishma however orders Malishka not to speak rubbish since she will not get Rishi if she dies.

Elsewhere in the hall, Virendra tells Lakshmi and Rishi that he has invited the client for today’s night dinner.

After Virendra walks away, Ayush tells Rishi and Lakshmi are hiding things together.

In the meantime, Karishma and Sonal motivate Malishka not to give up even though she is exhausted.

Karishma adds that Sonal will help her get Rishi as Lakshmi and Rishi have no compatibility.

On one hand, Ayush questions Rishi and Lakshmi if they can see something special in the photo but they both deny it; on the other hand, Karishma tells Malishka that Lakshmi and Rishi are not even friends.

After Ayush walks away, Lakshmi questions Rishi about what they are doing together and Rishi utters pure friendship.

Later, Ayush finds Rishi sulking in the room and asks him if he loves Lakshmi or Malishka but before Rishi can answer, Lakshmi appears there and urges him to give her some money for Harleen.

Malishka and Sonal who were watching it from a distance announce that they will steal Rishi sometime to rejuvenate their old memories.

© Copyright tellybest.com, 2022, 2023. All Rights Reserved. Unauthorized use and/or duplication of any material from tellybest.com without written permission is strictly prohibited.
Cached Saved on: Friday 27th of January 2023 11:16:24 AMCached Disp on: Thursday 2nd of February 2023 08:45:40 PM