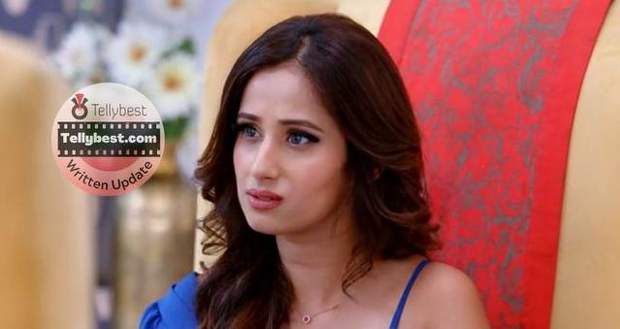 Today's Bhagya Lakshmi 4th January 2023 episode starts with Kiran saying that Malishka was very happy after hearing the news of her and Rishi getting married to each other and cannot understand what made her do such a thing.

Rishi tells Kiran that he does not know why Malishka did such a thing when Sonal asks him if he refused to marry Malishka.

Rishi confesses that he denied marrying Malishka which makes both Kiran and Sonal upset.

Sonal asks Rishi why he did such a thing knowing that Malishka loves him like a mad person.

Rishi says that he does not understand anything and remains silent despite Sonal trying to pressure him.

Sonal gets disappointed in Rishi as he does not tell the truth about him and Malishka spending the night together and decides her masterstroke.

Meanwhile, Shalu messages Ayush about their plan getting flopped and asks Lakshmi if she is angry at her.

Lakshmi says that she knows that Shalu thinks about her happiness and sends her to Rano at a neighborhood shop.

Ayush receives Shalu’s message and gets disappointed in knowing that their plan failed miserably.

After a minute, Sonal enters Lakshmi’s house and asks for help from Lakshmi joining her hands before her.

Lakshmi asks Sonal what help she can do to them and gets shocked to hear that Malishka tried to kill herself by drinking poison.

Sonal requests Lakshmi to save Malishka as she is willing to kill herself because Rishi has refused to marry her.

Lakshmi changes her expression upon hearing Rishi’s name while Sonal says that Rishi considers himself indebted to Lakshmi and is not advancing toward Malishka.

Sonal reminds Lakshmi about Rishi toying with Malishka’s self-respect and says that they could have charged him with rape accusations but Malishka loves Rishi.

Sonal asks Lakshmi if she can let Rishi and herself live with the guilt of Malishka’s death if the same thing repeats again.

As Lakshmi asks what she is supposed to do, Sonal asks her to step away from Rishi and Malishka.

Lakshmi gets emotional thinking about the situation while Sonal smirks seeing her words doing magic.

Meanwhile, Neelam arrives and takes Kiran outside the room with her so that she can calm herself.

Rishi plans to tell everyone about his mistake and receive whatever punishment his family gives him when Lakshmi enters.

Sonal leaves the room after placing her phone so that she can hear everything.

Rishi says that he is glad that Lakshmi has come as he is unable to handle the situation alone.

Lakshmi asks Rishi why he is not agreeing to marry Malishka when she is the one whom he loves.