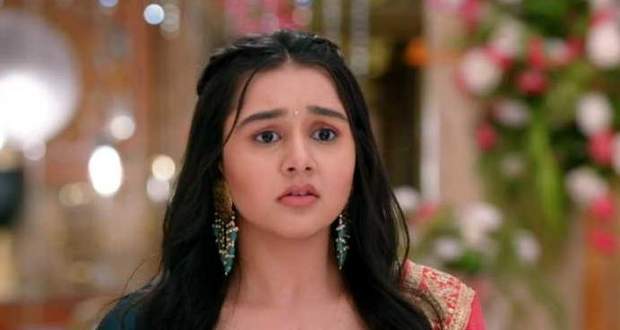 Balwinder says that his love for Lakshmi is unbinding and not fake like Rishi’s who is now engaging Malishka.

Hearing those creepy words from Balwinder, Shalu tells him that love seems like slang by his mouth and leaves.

Meanwhile, Rishi comes to Lakshmi’s room and asks her why she interrupted today’s function.

Lakshmi tells Rishi that she saved him from committing an illegal activity and going to jail.

However, Rishi does not buy Lakshmi’s words and asks her why she saved him from going to jail if she hates him.

Lakshmi gets silent on being unable to give an answer while Rishi continuously pressurizes Lakshmi to revert to his question.

Rishi laments Lakshmi’s presence and blames her for ruining the most beautiful day of his life.

On hearing this, Lakshmi gets hurt and asks Rishi if he thinks so negatively about her.

Rishi answers with a yes and tells Lakshmi that she wants to exert her dominance by being great in front of everyone.

However, Rishi gets silent as Lakshmi explains the actual series of events that happened throughout the engagement.

Meanwhile, Malishka gets welcomed by her house staff with a cake to celebrate her engagement.

Malishka throws away the cake in anger and leaves the drawing-room.

While Lakshmi warns Rishi that he is not allowed to be with Malishka for the next 2 months and 1 week, Malishka video calls Rishi.

However, Lakshmi comes in and hangs up the call after telling Malishka that she has important things to discuss with Rishi.

Lakshmi repeats the same thing in Punjabi as Malishka calls Rishi again and runs away with Rishi’s phone.

Rishi comes after Lakshmi to the kitchen to get back his phone.

Putting conditions, Lakshmi says that she will return the phone if Rishi promises to behave nicely with her.

However, Rishi snatches the phone from Lakshmi and submerges it in water so he will not lose it to Lakshmi.

Rishi talks with Malishka on Ayush’s phone and tells him about Lakshmi.

Ayush asks Lakshmi to get out of the house while fuming with anger as nobody likes her.