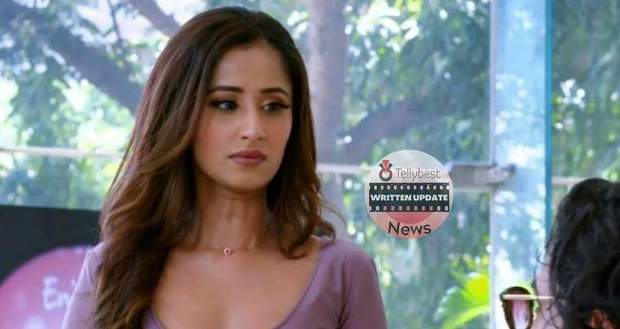 Today's Bhagya Lakshmi 4th October 2022 episode starts with Sonia being surrounded by the crowd on the road as people recognize her as an Oberoi and their anger bubbles up remembering the crime committed by the Rishi.

Sonia tries defending herself saying that Lakshmi is responsible for all of this, not her brother Rishi.

Meanwhile, Ayush and Lakshmi are passing by from there discussing getting Rishi out of prison.

Lakshmi's eyes wander on the road and settle on Sonia who is getting humiliated by the crowd.

Stopping Ayush from driving further, Lakshmi hastily runs to rescue Sonia from the crowd’s wrath while Ayush follows her.

Sonia tells the public that this lady is Lakshmi who is the cause of every problem, which also directs the public’s anger toward Lakshmi.

As the public starts misbehaving with Lakshmi, she tries to calm them down by stating that they are innocent in the case and will soon be proved in court.

No one pays heed to Lakshmi’s words, however, when Ayush threatens them with a police complaint against all of them they all back off.

Sonia angrily leaves from there in the car leaving Ayush and Lakshmi worried behind.

Furthermore, Karishma and Neelam see Sonia entering the Oberoi mansion in a messy state with tears running down her eyes.

At the same time, Lakshmi and Ayush also enter the house whom Sonia welcomes with accusatory eyes.

Boiling in anger, Sonia takes the jug filled with water, ready to pour over Lakshmi to avenge her insult in the public.

Despite Ayush asking her to stop, Sonia swings the jug towards Lakshmi, however, Virender holds Sonia's hand mid-air, rescuing Lakshmi from being assaulted by Sonia.

Virender asks Sonia to calm down assuring her that the situation will get alright in time.

After Sonia leaves, Neelam reprimands Lakshmi for being the bad omen for the Oberoi family who keeps bringing problems again and again to Rishi and the family.

Virender and Ayush console Lakshmi after Neelam leaves as Lakshmi starts guilt-tripping herself.

Elsewhere, Malishka is turning and tossing in her bed unable to sleep as the thoughts of Rishi belonging to Lakshmi and ditching her keep running in her mind.

Malishka regrets bringing Lakshmi into Rishi’s life and getting both of them married.

Meanwhile, Lakshmi is only wishing for a bright morning that will take them closer to the culprit and their problems will be resolved.

In the prison, Rishi is also missing Lakshmi and craves her hugs and embraces.

Malishka swears to get Rishi back and celebrate Dussherra with him like any other year.

On the other hand, Lakshmi dreams of Rishi being released from prison who wakes her up in the morning.

Lakshmi shares a sweet moment with Rishi which is very short-lived as her dream gets broken and she wakes up to reality.

© Copyright tellybest.com, 2022, 2023. All Rights Reserved. Unauthorized use and/or duplication of any material from tellybest.com without written permission is strictly prohibited.
Cached Saved on: Monday 21st of November 2022 07:43:11 AMCached Disp on: Tuesday 6th of December 2022 12:13:39 PM