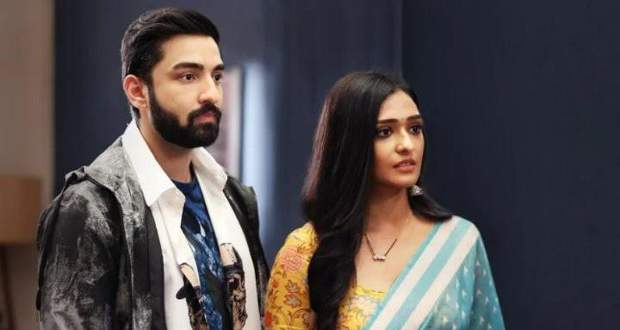 The couple bumps their head and Harleen makes them bump their heads again so that they don't fight again and love each other.

However, Kiran sees them and gets angry thinking about how Malishka is left alone.

Afterward, Aayush asks Lakshmi about Shalu while Harleen teases him about caring for her.

Just as soon as Shalu comes there with Neha, Aayush puts on his macho man attitude and argues with Shalu.

Meanwhile, Neha eyes Aayush as she recalls her mother advising her to trap Aayush in her love and stay awry of Shalu.

Back in present, Aayush and Shalu teasingly argue with each other while Neha tries to butter him up with her sweet act.

However, Rishi tells Aayush and Neha to follow Shalu's instructions and take the help of servants if he wants.

Elsewhere, Malishka sits in her room recalling how Rishi threw her aside when she tried to hug him.

She starts pacing in her room and thinks out loud that she should have gone to talk with Balwinder herself instead of sending Kiran as she knows she could have manipulated Balwinder anyhow.

Malishka thinks that she cannot do anything by herself since she knows Durga Devi is keeping a watch on her.

Just then, Kiran comes there and tells Malishka that she has convinced Balwinder to work for them.

Kiran tells her how Rishi and Lakshmi are flirting out in the open while Malishka says that once Lakshmi is out of Rishi's life, she will make sure to get her Rishi back.

Meanwhile, in the hall, Aayush holds the stool while Shalu climbs upwards and tried to fix the flower decoration.

Aayush tries to scare her by removing his hands from the stool but Shalu holds his hair and threatens to make him bald if she falls.

Lakshmi gets shy and leaves while Rishi reveals to Harleen that he intends to buy a gift for Lakshmi.

Malishka overhears them and gets angry.

On the other side of the house, Ahana requests Karishma that she wants to wear Lakshmi's saree just like her but Karishma refuses.

Further, Karishma throws the saree away in anger which lands in Lakshmi's hands as she's entering, and tells Ahana that people who wear that saree are classless.