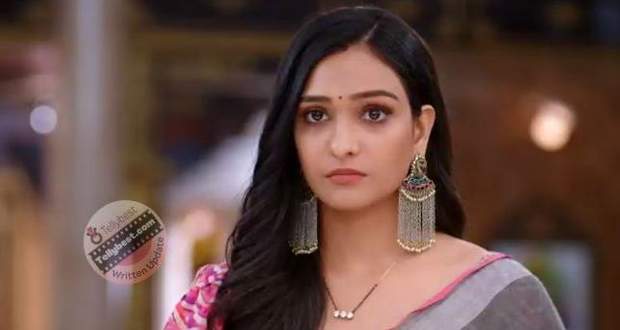 Today's Bhagya Lakshmi 5th December 2022 episode starts with Sonal telling Lakshmi to leave since she wants to sit and talk with her old friends.

Lakshmi tells them that she is leaving and tells Rishi to have fun with his friends.

Aayush tells Malishka to not do anything weird as Rishi is Lakshmi’s husband now while Sonal tells Aayush that they are not there to steal Rishi.

Aayush laughs as he tells the girls that they won’t be able to do it even if they wanted and leaves from there.

Sonal tells Rishi that she knows he and Lakshmi are happy with each other and that she is not there to break them apart or anything.

Further, she turns to Malishka and tells her that she should not tell Rishi that she loves him now that he is Lakshmi's husband.

Meanwhile, Virendra tells Lakshmi that Mrs Almeda will be here anytime and if everything is well prepared or not.

Neelam ignores Lakshmi and asks her staff if everything is taken care of or not while the staff tells them that Lakshmi has prepared the food for tonight.

However, Virendra clears the misunderstanding and later introduces Lakshmi to her.

Mrs Almeda gets impressed by Lakshmi’s manners and tells her that she reminds her of her daughter who was lost in a bomb blast.

Malishka tries to humiliate Lakshmi but Virendra and Aayush come to their rescue.

Later, Malishka expresses her anger about feeling down compared to Lakshmi.

Sonal tells Malishka that she accepts that she has underestimated Lakshmi but she tells Malsihka she will fulfil her promise to her and makes Rishi hers.

Meanwhile, Mrs Almeda invites everyone to her Nephews wedding and gives credit to Lakshmi for feeling like a family.

Mrs Almeda also shares her sadness at not being able to meet her sister before reception while Lakshmi gives a subtle signal to Rishi.

Elsewhere, Sonal tells Malishka that she will make every effort to get her married to Rishi.

Malishka tells Sonal that she tried to frame Lakshmi in her kidnapping so she spends her life in jail but she failed terribly.

Later, Sonal tells Malishka that she will not stop from killing Lakshmi if she feels the need.

After a while, Malishka tells Sonal about Balwinder and offers to set up a meeting with him.

However, Sonal tells her that she does not need it.

On the other hand, Aayush asks Rishi to check his presentation but he assures him that he trusts him and his efforts.

Aayush becomes emotional and thanks Rishi for having confidence in him.

Later, Lakshmi tries someone’s number but it does not connect.

Meanwhile, Sonal asks Malishka to call Balwinder on video call so she can see him and decide if he is of any use to her or not.

Balwinder talks in his jolly nature and tells Sonal to return Malishka’s phone back to her or else she will regret it.

Later, Balwinder flirts with Sonal while Malishka tells her that Sonal has some work for him.

However, both Malishka and Balwinder look surprised when Sonal asks him to come to Oberoi's house immediately.

© Copyright tellybest.com, 2022, 2023. All Rights Reserved. Unauthorized use and/or duplication of any material from tellybest.com without written permission is strictly prohibited.
Cached Saved on: Thursday 26th of January 2023 03:22:07 AMCached Disp on: Monday 6th of February 2023 02:55:08 AM