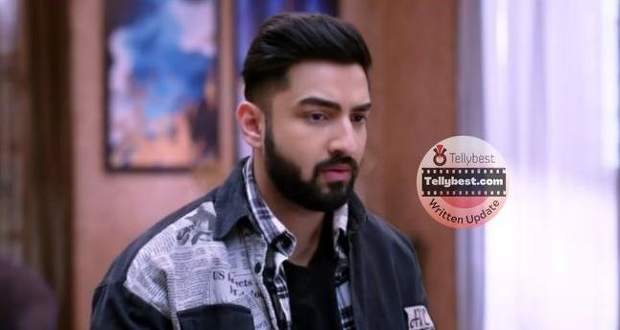 Today's Bhagya Lakshmi 5th January 2023 episode starts with Lakshmi asking Rishi why he is refusing to marry Malishka when he loves her.

Lakshmi reminds Rishi how he had a relationship with Malishka prior to and during their marriage and was fooling her.

Rishi asks Lakshmi what she is saying and Lakshmi says that he married her while loving Malishka.

Lakshmi says she had a misconception about Rishi as she thought he was a kind and good person but he is proving her wrong.

Sonal hears Rishi and Lakshmi’s conversation and thinks that it is the correct moment to send Neelam and Kiran in for them to hear the truth from Lakshmi’s mouth.

Sonal asks Neelam and Kiran to visit Malishka so that they can check whether Malishka has woken up or not.

Lakshmi asks Rishi how he can refuse Malishka after whatever he did with her that night.

Neelam and Kiran stand at the door and pause their entry hearing Lakshmi’s words.

Lakshmi asks Rishi if he is not proceeding with his and Malishka’s marriage because of her as he is indebted to her to which Rishi tries to convince Lakshmi that he does not mean anything like that.

Telling Rishi how important a girl’s self-respect is, Lakshmi tells Rishi that he has taken away Malishka’s dignity and respect.

Hearing that, Neelam and Kiran enter with shocked faces and face Rishi after pushing away Lakshmi.

Neelam says that what Rishi was done is unforgivable and she is feeling ashamed of being his mother.

Shutting up Rishi with a tight slap, Neelam asks Kiran to give her son whatever punishment she wishes to give him after what he has done with Malishka.

Kiran asks Rishi why he did such a lowly thing after she considered him her son, making Rishi feel guilty.

Meanwhile, Neha asks Rano whose marriage preparations are going on to which Rano replies that it is her marriage that they are planning.

Neha says that her ideal type is someone who is like Rishi or Ayush which strikes Shalu a bit.

Rano sends Shalu and Bani away and says that she has found a top-class family for her.

Bani tells Shalu that something is not fitting right how things are going and predicts that Rano has something hidden from them.

Balwinder swears to marry Lakshmi this time after doing something about Rano who is causing trouble for him.

Coming back, Neelam turns to Lakshmi and says that she intentionally hid everything from them so that she can reveal everything in front of everyone like that.

Just then, Sonal notices Malishka waking up and Neelam and Kiran surround her to check on her.

Malishka gets upset as she hears that everyone knows about her and Rishi’s incident and says that she should have died.