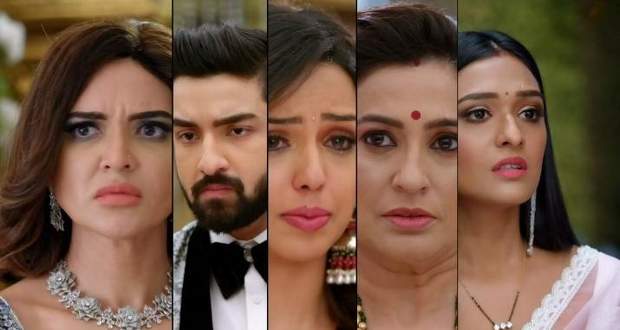 Today's Bhagya Lakshmi 5th July 2022 episode starts with Lakshmi thinking about how to make everyone's mood lighter so they don’t get angry with Ahana.

However, when she tries to cheer everyone up, Neelam calls her shameless for breaking Ahana’s engagement.

At the same time, Karishma also joins Neelam in her yelling.

Hearing this, Ahana tries to save Lakshmi from humiliation by telling them that she is responsible for it but Neelam dismisses her quickly.

Neelam then proceeds to tell Lakshmi how she has become a burden to them.

Seeing Lakshmi’s crying face, Rishi takes a stand for her in front of Neelam.

He even tells everyone that Ahana is his sister so he will support her no matter what.

Elsewhere, psycho Balwinder calls Rano to inform her that if Lakshmi does not obey him then he will do a blood bath at the Oberoi mansion.

This frightens Rano and she tries to dodge Balwinder by telling him that she is not home.

Hearing this, Balwinder cuts the call.

Meanwhile, in the Oberoi mansion, Rishi asks everyone why Ahana told this news to Lakshmi not them.

After listening to Rishi’s words for a long, Karishma announces that Lakshmi just uses everyone for her benefit.

She even accuses Lakshmi of doing black magic on Ahana.

However, Rishi then asks everyone how much they spend time with Ahana.

When everyone lowers their eyes, he informs them that Ahana feels alone in the house despite being with everyone.

He even tells everyone that he and Lakshmi are not divorced yet so Lakshmi is still his wife.

After Rishi finishes, Neelam accuses Rishi of being wrong for taking Lakshmi’s side.

During the chaos, Harleen cryingly asks everyone to ask Ahana, not Lakshmi.

Even Ayush then takes Lakshmi’s side and asks Neelam why she is blaming Lakshmi for it.

He even says that it is easy to blame others for our own mistakes.

After that, he begs forgiveness from Lakshmi for mistreating her.

After hearing Ayush’s apology, Neelam refuses to listen and once again blames Lakshmi for not telling her.

© Copyright tellybest.com, 2022, 2023. All Rights Reserved. Unauthorized use and/or duplication of any material from tellybest.com without written permission is strictly prohibited.
Cached Saved on: Wednesday 25th of January 2023 06:02:01 PMCached Disp on: Thursday 9th of February 2023 08:30:48 AM