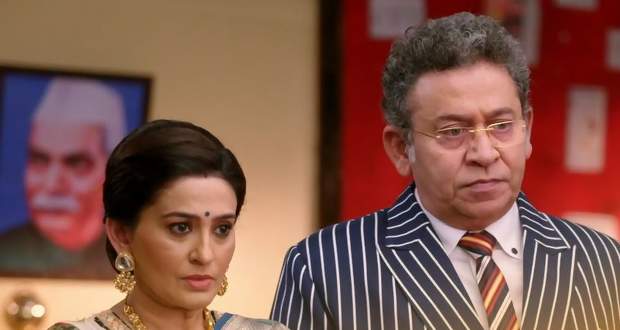 Today's Bhagya Lakshmi 5th May 2022 episode starts with Neelam accusing Lakshmi to be the reason for all the troubles in Rishi's life.

While returning to the resort, Neelam makes sure to keep Lakshmi in another car to avoid her being near Rishi.

When Rishi arrives at his room, he spots Malishka there.

So, Malishka starts making excuses by saying that she came to Mahabaleshwar after finding out that Rishi got arrested.

Rishi confronts her for calling the police pretending to be Lakshmi.

Though Malishka was mistaken, she tries to defend herself by blaming Lakshmi.

However, Rishi asks Malishka not to bring Lakshmi in between because none of this nuisance was done by her.

Malishka keeps arguing but Rishi warns her from doing such stupid deeds in the future.

After Rishi freshens up, Lakshmi arrives in the room and tries to have a mature conversation with Rishi to find out what has she done that is causing her to be blamed.

Later, Lakshmi spots Malishka and talks to her. Lakshmi tells Malishka that what she has done is naive and also warns her from doing anything against her married life.

In the meantime, Rishi meets a little girl named Juhi.

From a distance, a waiter watches Rishi and recalls seeing him fighting with Balwinder.

Juhi falls into an underground cave while playing and Rishi slips in too while he tries to save her.

Meanwhile, Lakshmi's instincts give her restlessness as she feels that Rishi is in danger.

When the waiter spots Lakshmi, he recalls how Rishi fought with Balwinder and stopped him from marrying Lakshmi.