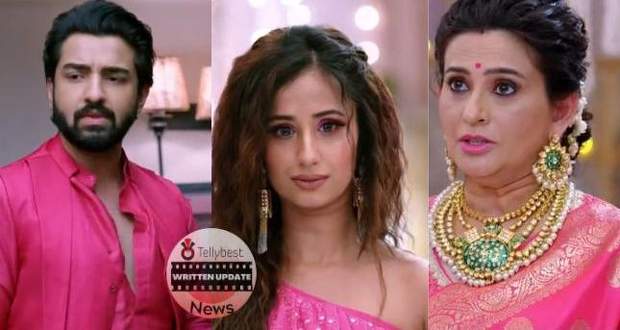 Meanwhile, Rishi urges Lakshmi to rest, and apologies to her on Neelam’s behalf but Lakshmi informs him that Neelam is not at fault.

She further adds that anyone who smells her hands will think she has eaten something and Rishi suggests that maybe Lakshmi got the smell while serving him food.

Ayush however dismisses Rishi’s words and finds a bottle near the bed.

Ayush then tells Rishi it contains the same food smell and suggests finding the culprit but Rishi advises that they should inform Neelam first.

On the other hand, while Neelam and others are busy due to puja, Rishi arrives there and urges Neelam to stop the puja.

Rishi then orders Malishka to come forward and questions her if she has eaten anything or not.

Malishka replies negatively and Rishi brings the bottle out of his pocket and questions Malishka if she wants to see magic.

Kiran on the other hand starts thinking that maybe Rishi is angry with Lakshmi for breaking her fast and wants to get close to Malishka again.

Finding the bottle in Rishi’s hands, Malishka curses Soniya for being stupid but Rishi sprays the liquid on Malishka’s hands.

On one hand, Malishka is smelling her hands; on the other hand, Rishi sprays the liquid on Neelam’s hands who gets stunned by the smell of food.

Rishi then reveals that Neelam’s hands are smelling just like Lakshmi’s even though she has not eaten food so Lakshmi is not guilty.

Hearing this, Rano accuses Neelam of disrespecting Lakshmi in front of everyone, and Virendra orders Ayush to bring Lakshmi down for the puja.

Harleen however stops Ayush and reminds Neelam that Lakshmi has protected Neelam’s respect so Neelam should do the same and Neelam calls Lakshmi reluctantly.

Hearing Neelam’s voice, Lakshmi gets surprised and runs down the stairs for the puja.

Meanwhile, everyone including Rishi praises Neelam for accepting her own mistake while Neelam just nods.

Neelam then orders Ayush to check the footage to find the culprit.

On one hand, Ayush opens the laptop to check the footage; on the other hand, scared Malishka tells Soniya that Lakshmi is doing puja with everyone since Rishi has proved Lakshmi is innocent and Ayush is looking through the footage.

Soniya quickly opens her laptop to erase the memory and Malishka begs Soniya to delete it.

Frustrated Soniya reminds Malishka that she will erase the footage as she is also involved.

Meanwhile, Rishi informs Virendra that he is sure Balwinder has done it but Virendra looks unconvinced.

On the other hand, after kissing himself in the mirror, Balwinder happily announces that only Balwinder Sood deserves Lakshmi.

However, Balwinder quickly changes his name to Ballu Sood as he thinks his full name causes trouble for him.

Later, Malishka gets a call from Kiran who orders her to find a way to get out of the mess very soon.

After cutting the call, Malishka falls on the bed and breaks the laptop by mistake.

Seeing the laptop screen broken, panicked Soniya informs Malishka that they are finished but Malishka announces that they will take Ayush’s laptop to delete the footage.

Later while Ayush is going out of the room to show Neelam footage, Malishka and Soniya stop him and propose to do it for him.

© Copyright tellybest.com, 2022, 2023. All Rights Reserved. Unauthorized use and/or duplication of any material from tellybest.com without written permission is strictly prohibited.
Cached Saved on: Monday 21st of November 2022 04:37:01 AMCached Disp on: Saturday 10th of December 2022 03:40:17 PM