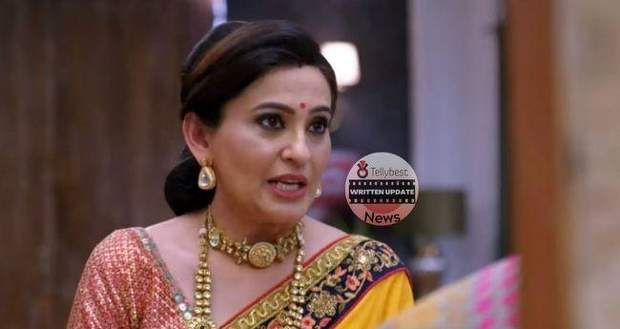 Neelam says that she wants to celebrate Dussehra with Rishi only while Malishka comes crying and says that she is feeling bad and missing Rishi.

Karishma thinks that Malishka's love is pure and consoles her.

Meanwhile, a hotel staff member (Mangesh) comes with the pen drive which has the footage of the food incident which worries Malishka.

Malishka tries to steal the pen drive while Lakshmi holds her hand and asks her where she is taking it.

Malishka escapes the situation saying that she was bringing it to Lakshmi only.

At the same time, Virendra asks to play the footage in the hall itself so that everybody knows the truth.

However, Mangesh tells the pen drive is exchanged with the wrong one and the real one is on its way.

Later, Lakshmi brings Harleen her medicines and informs her that they have found proof to prove Rishi's innocence.

Harleen blesses Lakshmi as she and her family are lucky to have her.

Outside the house, Aayush is anxious and asks Mungesh to hurry up in bringing the correct pen drive.

Just then, Shalu comes and she and Aayush start arguing cutely over every word they utter.

Shalu asks him the reason for standing there while she excitedly hugs him after Aayush tells her that they have found a piece of evidence to prove Rishi innocent.

Aayush smartly asks Shalu to hug him again and they start calling each other smart sarcastically.

Later, Malishka worries that the pen drive will reveal her secret and things about taking help from Balwinder who is lying like a drunkard in his room.

Balwinder says that Malishka has spoilt his dream of Lakshmi while Malishka tells him about the pen drive which breaks his deep intoxication.

Balwinder and Malishka argue over each other's foolishness while Balwinder funnily asks her to commit suicide together.

Just then, Malishka tells him about the wrong pen drive while Balwinder gets an idea to stop Pendrive mid-way and asks for 2 lakh rupees in return.

Meanwhile, Rishi is shyly remembering Lakshmi and her brevity.

Rishi's inmates ask him whether he has confessed his words to Lakshmi while Rishi keeps on praising Lakshmi's efforts to get him out.

They appreciate Rishi's love for Lakshmi as because of that love only he is in jail.

Later, a police officer informs Rishi that he will be shifted to another jail soon while Rishi denies shifting as he fears that Lakshmi will not be able to meet him.

Meanwhile, Mangesh calls his junior who is sitting in the car with the pen drive. Balwinder has set Guddu after him.

In the Oberoi House, Neelam asks Virendra when will Rishi be out and everyone gathers in the hall.

Lakshmi gets a call from Mr. Basu who has got papers ready for Rishi's bail.

Harleen praises Aayush for supporting Lakshmi while Malishka is tense and gains sympathy from Soniya.

Soniya says that Lakshmi is a fool to give proof of her fault unaware that Malishka is the real culprit.

At the same time, Malishka gets a call from Balwinder and informs her about his plan.

© Copyright tellybest.com, 2022, 2023. All Rights Reserved. Unauthorized use and/or duplication of any material from tellybest.com without written permission is strictly prohibited.
Cached Saved on: Monday 21st of November 2022 05:47:02 AMCached Disp on: Tuesday 6th of December 2022 12:29:20 PM