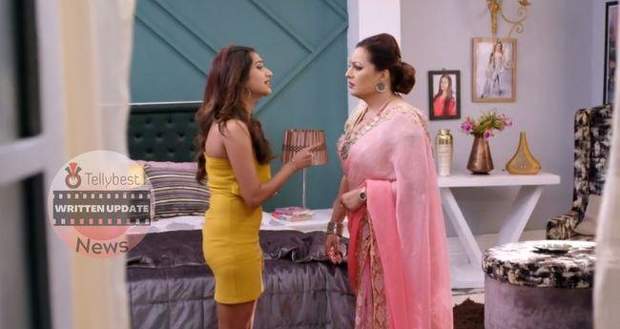 An office staff comes in and reports to her that Rishi has got the idea that Mukesh is missing in exchange for money.

A tensed Malishka rushes to Rishi’s cabin and asks him if he is fine since she saw Aayush running over to him.

Rishi says he is absolutely fine because the culprit is Mukesh, who has been missing since the accident.

Malishka defends Mukesh and says that he asked her permission to leave for his hometown and Rishi gets stressed.

However, Mr. Basu declares that there is one way by which they can buy some time for the investigation and also rescue Lakshmi out of the jail.

Everyone gets shocked including Malishka while he continues that the situation may get worse since the condition of two guests is still critical in the hospital.

On being asked about the plan, Mr. Basu says that for the time being they can shift the blame to someone else until they get their investigations done, but Rishi needs to agree to this.

Malishka tries to explain that this is wrong and unethical but Rishi agrees and says he says he will do anything for Lakshmi and Malishka gets jealous.

Meanwhile, Virendra’s visiting time is almost over when Lakshmi tells him to take care of himself for just one day and that she will be back tomorrow.

Later, Rishi goes to the jail to meet Lakshmi with a box of sweets for everyone as good news in advance since Lakshmi will be free by tomorrow.

Lakshmi sees Rishi and over smiles widely while Rishi shares the sweet with her cellmates.

He also makes her eat the sweet while the lovely duo bickers cutely over if Rishi should have come to meet her or not.

Rishi tells her that she will be free tomorrow and Lakshmi overwhelms with joy.

She asks Rishi about the condition of the patients in the casualty and Rishi says everyone has gotten better and hides the truth that two patients are still critical.

Meanwhile, Malishka is getting stressed over Mr. Basu and Rishi’s plans when suddenly Abhay comes and makes her calm down.

He tells her to not worry and comes up with an idea to make Malishka reach her direct goal and tells her his plan.

They suddenly hear applause from Kiran who says to Abhay that no matter how different they both are but they would do anything for their daughter.

The next day, Dadi prays to God for Lakshmi’’s freedom when Rishi sees it and begins praying too.

He says to the god not to punish Lakshmi for she is innocent but instead punish him for treating her wrong.