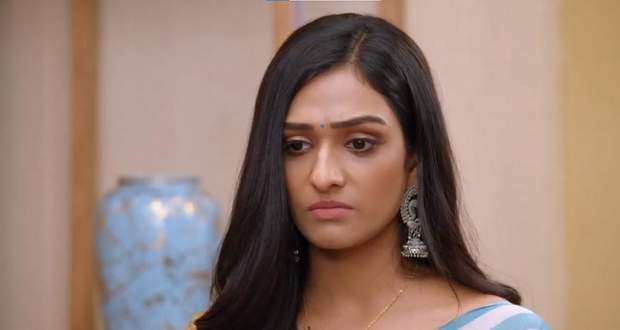 However, Ahana argues that it would be a moment of pride for her to look like Lakshmi.

Lakshmi comes inside and explains to Ahana that she should not talk back to elders and follow their orders.

Karishma tells Ahana to follow after Malishka if she wants while Aayush overhears them.

He enters the room and tells Ahana to just think about her inner beauty and also tells Karishma to accept Lakshmi.

Although she is angry at her kids, Karishma blames Lakshmi for separating her kids from her and leaves in anger.

Lakshmi scolds Ahana and Ayush while they tell her to not worry about anything.

Meanwhile, Karishma goes to Neelam and complains about Lakshmi manipulating all the family members and tells Neelam that they have to do something soon.

At the same time, Harleen talks to Dadaji's picture while Lakshmi joins her and has an emotional talk with her stating that Dadaji lives on in their hearts.

Elsewhere in the kitchen, Neelam tells Karishma to put some of the kheer aside and add garlic to the remaining Kheer which will be served as Halwa.

However, Ahana comes there and the ladies start making excuses that they came to see if the preparations are done or not.

Ahana opens the lid to show the Kheer while Neelam and Karishma panic.

On the other side of the house, Malishka looks for Rishi while he enters the room and brings out a necklace from the shopping bag.

He puts the necklace around Malishka's neck and she feels happy while Lakshmi enters the room.

Rishi walks to Lakshmi with the necklace and gives it to her saying that he bought it for her as soon as the showroom opened.

Malishka walks away in anger while Lakshmi tells Rishi that he shouldn't have done that since Malishka will have hopes now.

Rishi argues that it is her fault and flirts with Lakshmi.

Aayush interrupts the couple and tells them to get ready for Pooja.

Once Aayush leaves, Rishi once again flirts with Lakshmi by asking her if she likes the necklace and she shyly nods her head.