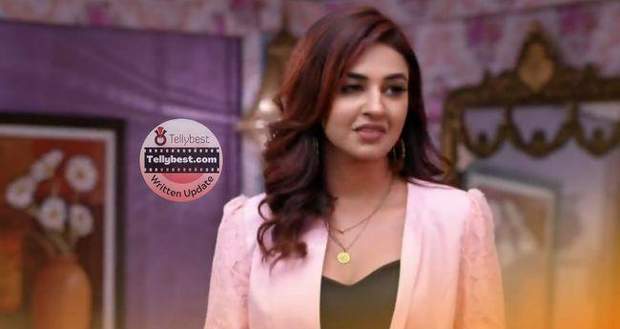 Neelam further tells Malishka that she always loved her as her own daughter and she always wanted to make Malishka her daughter-in-law.

While Rishi is shedding tears, Neelam yells at him that if he still wants to stay as her son, he has to marry Malishka.

Malishka tries to scream at Lakshmi for coming but Sonal announces that she is the one who brought Lakshmi here.

However, looking at Lakshmi sternly, Neelam calls her a bad omen who has always brought misery to Rishi.

Afterward, Neelam is crying silently in the car whereas Lakshmi is walking on the road feeling guilty for exposing Rishi’s secret like this.

Later, when Neelam arrives at the Oberoi mansion with tears in her eyes, she meets Harleen and hugs her tightly.

In tear choked voice, Neelam takes Rishi’s name which stresses Harleen and she questions Neelam if Rishi is okay.

In reply, Neelam announces that Rishi is all right which confuses Harleen even more and one by one all the family members arrive there.

When everyone begs Neelam to reveal the reason behind her tears, Neelam expresses Rishi has brought shame to the family.

Neelam further announces that Rishi has done unforgivable and she wishes this was just a dream.

While everyone begs Neelam to reveal what is really bothering her, Neelam tells everyone that Rishi has crossed limits with Malishka with a look of disappointment.

On the other hand, while walking on the road, Rishi feels buried under guilty for ruining Malishka’s life.

Realizing Lakshmi hates him now, Rishi's expression darkens as he feels Lakshmi is drifting apart from him.

Meanwhile, in Oberoi's mansion, Neelam breaks down in tears and reveals that Malishka attempted suicide due to Rishi and Virendra starts fuming in anger.

With an angry growl, Virendra yells that he will punish Rishi for this and orders Ayush to call Rishi.

Karishma tries to reason with Virendra by saying that Rishi and Malishka must have crossed the limits by mistake since they both love each other but Virendra announces that Rishi cannot justify his mistake now.

Ayush tells Virendra to believe in Rishi but Virendra announces that Rishi has accepted his mistake so they don’t need any more proof.

In the meantime, Rishi falls to the ground and starts sobbing uncontrollably while mumbling that he does not know how he crossed the limits with Malishka.

In between sobs, he gets Neelam not to turn away from him as he will not be able to bear it.

Hearing this, everyone gets shocked and Neelam accuses Lakshmi of bringing misery into Rishi's life.

However, Virendra orders Neelam not to bring Lakshmi into this as Rishi has hurt Lakshmi and Malishka both and Neelam closes her mouth.

On one hand, Rishi is recalling his memories with Lakshmi with a gloomy expression; on the other hand, Kiran tries to make Malishka understand that she is also equally at fault.

However, Sonal takes Malishka's side by announcing that Malishka has done this because she loves Rishi.

When Malishka threats to kill herself, Kiran announces that she only wants Malishka's happiness.