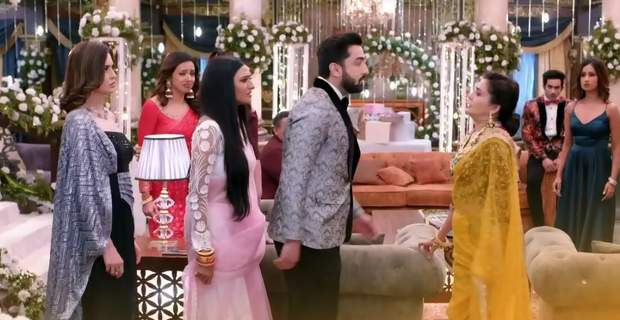 Today's Bhagya Lakshmi 6th July 2022 episode starts with Lakshmi asking God why he has messed up everything in this house.

When Lakshmi starts self-doubting herself, Rishi consoles her by saying that the time is bad for her that’s it.

Rishi says that Lakshmi has done everything to save Ahana’s reputation and she has no one to talk to in the Oberoi family.

Hearing this, emotional Lakshmi looks at Rishi with love and says that she has her husband to talk to.

Saying this, Lakshmi tries to walk away but Rishi stops her by announcing that indeed he is her husband so she should talk to him about everything.

After promising Lakshmi that he will protect her, Rishi hugs Lakshmi.

He even says that he will become a good brother to Ahana.

Elsewhere, Malishka goes to Neelam’s room to complain to her about Lakshmi and Rishi’s growing closeness.

Hearing this, frustrated Neelam tells Malishka that Lakshmi has insulted her the most.

She even expresses her confusion about Balwinder’s drama.

Looking at Neelam’s frustrated face, Malishka thinks that she has made a big mistake by involving Balwinder in it.

Later, Ayush goes to Lakshmi’s room and asks Lakshmi to slap him.

Hearing this, Lakshmi gets confused and tells Ayush that he has done everything right.

He then promises Lakshmi that he will become a protector for her.

While Ayush and Lakshmi are hugging each other with tears, Rishi asks them if they are done with moping.

As expected, Ayush informs Rishi that he deserves to be emotional but Rishi ignores him and asks him to chill on the rooftop.

Ayush tries to dodge the plan by asking Rishi if he is planning to push him from the edge.

In response, Rishi jokingly says that he may do this.

Before walking away, Ayush gives Lakshmi a tight hug.

On the other hand, Malishka goes to meet Balwinder.

Seeing Malishka, Balwinder asks her to give him his pending money.

However, Malishka denies it and arrogantly tells him that no one will believe someone like him.

Hearing this, Balwinder smirks and shows her the video recording of her.

As expected, Malishka gets scared and orders him to wait for a few days.

Meanwhile, Ayush and Rishi start planning ways to find out the culprit behind Balwinder’s drama.

© Copyright tellybest.com, 2022, 2023. All Rights Reserved. Unauthorized use and/or duplication of any material from tellybest.com without written permission is strictly prohibited.
Cached Saved on: Monday 21st of November 2022 06:51:06 AMCached Disp on: Friday 2nd of December 2022 03:44:06 PM