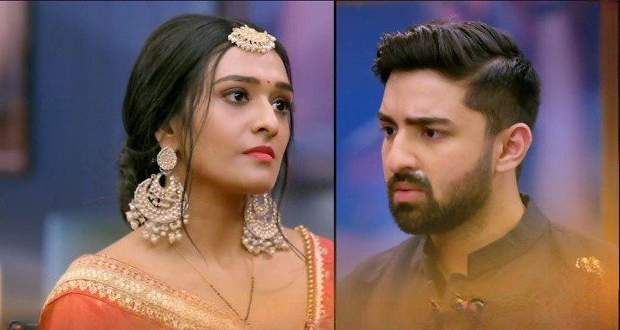 Today's Bhagya Lakshmi 6th June 2022 episode starts with Ayush asking Lakshmi to leave the Oberoi Mansion while Lakshmi is surprised as Lakshmi Ayush used to be her friend and now he acts like she does not matter.

She even announces that Rishi and her relationship is going to last forever and that none can break them apart.

On the other hand, Malishka informs Kiran smirkingly about Rishi and Lakshmi’s argument.

The next morning, Lakshmi serves breakfast to everyone and the servant, Mukesh gives Rishi his new phone.

As everyone questions Rishi about the new phone, Rishi replies that as he is starting new life he wants everything new.

Malishka also arrives there unannounced and Rishi asks her to give him her number. Karishma is surprised as Rishi does not remember Malishka’s number as she is his fiance.

To make Malishka jealous, Lakshmi uses this situation and asks Rishi to recite her number which Rishi does in seconds.

At the same moment, the doorbell rings, and Sudha joins them at the breakfast table. She then informs them about her London friend Mrs. and Mr. Guzral.

She further tells them that they have seen Aahana at the party and like her so they want to make Aahana their daughter-in-law.

Aahana agrees though she is skeptical about it.

After some time, Lakshmi tells everyone that she can make continental dishes for Guzral's family.

At first, everyone discourages her but later after hearing Lakshmi’s side they agree.

Aahana walks away from there disappointingly and Lakshmi follows her to the room.

In Aahana’s room, Lakshmi hugs Aahana and advises her to confess her feelings to her.

Later, Neelam enters Soniya’s room and scolds Soniya along with Karishma for the binge-watching movie. She then asks them to help her with arrangements.

Neelam further asks Karishma to talk to Aahana about the marriage.

On the other hand, Aahana goes to Lakshmi’s room and confesses her feelings to her. Lakshmi takes Aahana to her bed and starts explaining about married life.

Hearing this, Aahana gets motivated and tells Lakshmi about her past relationship.

Lakhmi then asks Aahana if she really wants to get married and Aahna replies yes.

Seeing Lakshmi and Aahana’s bonding Malishka gets even more insecure.

© Copyright tellybest.com, 2020, 2021. All Rights Reserved. Unauthorized use and/or duplication of any material from tellybest.com without written permission is strictly prohibited.
Cached Saved on: Friday 5th of August 2022 02:33:41 AMCached Disp on: Sunday 14th of August 2022 12:49:16 PM