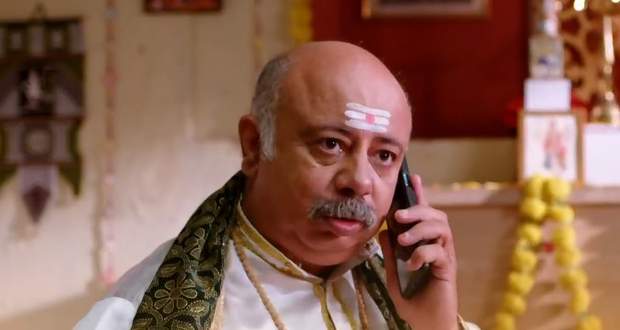 Today's Bhagya Lakshmi 6th May 2022 episode starts with Rishi roaming in the underground cave with Juhi trying to find a way out.

Further, Juhi and Rishi scream for help so that someone hears them and saves them.

On the other hand, Balwinder is seen getting fired from his work as a waiter on a roadside Dhaba (hotel).

Balwinder is still burning in the fire of revenge against Rishi.

At the same time, the waiter who recognized Rishi and Lakshmi calls Balwinder and informs him about their presence in Mahabaleshwar.

Balwinder is all set to return to Lakshmi's life and kill Rishi to teach her a lesson.

Meanwhile, Lakshmi searches for Rishi when she encounters Neelam and gets immensely insulted by her.

Further, Neelam names Lakshmi to be her worst mistake and also says that she won't let Lakshmi ruin her family's reputation.

At the same time, Lakshmi gets a call from Pandit Badrinath who informs her that Rishi will be in grave danger today.

The priest also warns Lakshmi that even if she stays eleven steps away from Rishi then he'll be attacked by the trouble.

Lakshmi returns to the place where he had heard Rishi's voice.

When Rishi walks near the cave, she hears Rishi and Juhi screaming for help.

While trying to help Rishi and Juhi, Lakshmi also falls into the cave.

Without noticing the situation, Rishi and Lakshmi start their couply fights again.

In the meantime, Malishka wants to leave Mahabaleshwar because she thinks Rishi is wrong in scolding Malishka for her dumb mistake.

However, Kiran convinces Malishka to win Rishi's heart by acting soft while Kiran makes sure the Oberois never accept Lakshmi asking their daughter-in-law.