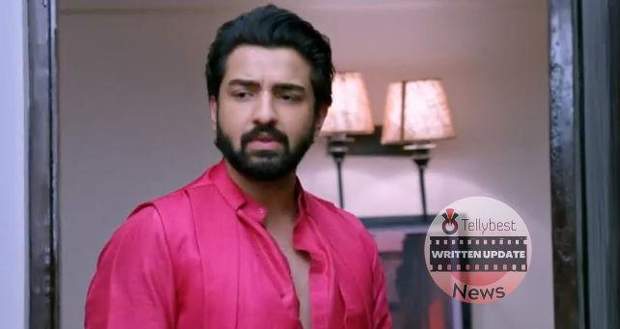 Today's Bhagya Lakshmi 6th November 2022 episode starts with Ayush walking away from Malishka and Soniya with his laptop.

After Ayush walks away, Malishka urges Soniya to replace Ayush’s laptop with hers.

Hearing this, Soniya scaredly informs Malishka that if they try to replace the laptop in front of everyone but Malishka replies that they need to take the risk regardless.

On the other hand, while Ayush is telling Neelam that they need to watch the footage now, Lakshmi arrives there and urges Neelam to finish the aarti first.

Neelam agrees to go thinking about Rishi and Virendra’s whereabouts while Malishka is waiting for an opportunity to replace the laptop.

Afterward, Virendra informs Ayush about Rishi talking to a client and Ayush walks away to check.

Soniya arrives there as soon as Ayush leaves and replaces Ayush’s laptop with hers.

On one hand, Rishi sits with Virendra after attending the call; on the other hand, Soniya deletes the footage from Ayush’s laptop.

Rishi then announces that he wants to see the footage now but Malishka advises him to wait till Neelam gets done with puja as it is for his good.

Rishi calms down and thanks Malishka for always thinking about the Oberoi family.

Meanwhile, during aarti, Lakshmi thinks Neelam just wants to know who is after Rishi’s well-being.

On the other hand, Ayush collides with Karishma’s friend Simmy and her daughter Binny.

Simmy urges Ayush to marry Binny but Ayush denies it.

He further announces that he has a girlfriend named Shalu whom he loves very much and runs away.

Rano who was eavesdropping on their conversation gets stunned to hear Shalu’s name.

Later, Neelam orders Ayush to play the video as soon as Ayush arrives in the hall, and Harleen orders Karishma, Lakshmi, and Rishi to stay in the hall to attend to the guests while others check the footage.

Afterward, Neelam and Ayush are disappointed to see no suspicious activity in the cameras while Malishka smirks.

Virendra even tells everyone that at least they know now Lakshmi has not broken her fast, but Neelam scoffs.

On the other hand, Rishi urges Lakshmi to see herself on the steel plate if she wants to see the moon while Lakshmi blushes.

After thanking Rishi for always supporting her, Lakshmi urges Rishi not to fight with Neelam for her but Rishi calmly announces that he will always be there for Lakshmi.

Hearing this, Lakshmi tells Rishi that she should record this moment because Rishi can change his mind but Rishi informs Lakshmi that she does not need to do it.

Rishi even compliments Lakshmi on her saree while she smiles and walks away.

Later, while Lakshmi is singing bhajan, Neelam looks at her sternly.