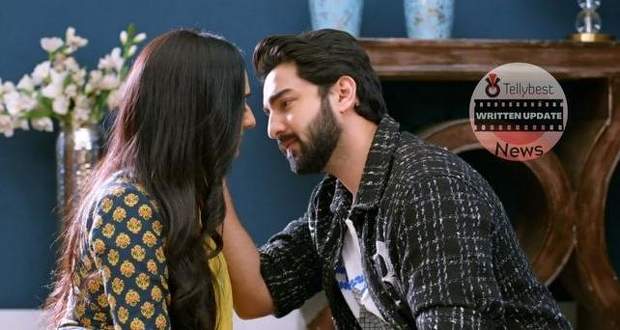 Today's Bhagya Lakshmi 6th October 2022 episode starts with the police officer informing Virendra that Rishi will only get out of jail when they submit court papers.

To this, Lakshmi and Virendra reply that Mr. Basu will soon arrive here with the bail papers.

At this exact moment, Mr. Basu arrives there, and Lakshmi inquires him about the papers but Mr. Basu stays silent.

On the other hand, while worried Rishi is pacing in his jail, he notices Lakshmi but thinks he is hallucinating.

Lakshmi then tells Rishi in a sad voice that Rishi that they have not found the right pen drive yet and Mr. Basu has arrived here with bail papers.

This makes Rishi nervous and he starts blabbering that he does not want to go far away from his family.

At the same time, a constable opens the lock of Rishi’s room.

While Rishi looks confused, Lakshmi tells Rishi that he has got the bail and out of excitement Rishi tightly hugs Lakshmi.

During the hug, Lakshmi notices Virendra standing there and pushes Rishi away.

Afterward, Rishi goes to thank Virendra but Virendra smilingly informs Rishi that he never should thank his father.

Meanwhile, in the Oberoi mansion, Soniya stands up impatiently and yells that everyone is wasting their time as no footage is coming now.

She even accuses Lakshmi is bad luck so Rishi will never get his bail.

Seeing Soniya’s drama, Harleen mutters under her breath that she will not waste her energy with these people.

Elsewhere, in the police station, Virendra urges Lakshmi to call Neelam to give her the good news.

At first, Lakshmi looks at him with hesitation but Virendra orders her to take the first step.

When Lakshmi calls Neelam, Neelam cuts Lakshmi in the middle sentence by accusing her of being bad luck for Rishi.

Hearing this, Lakshmi again looks at Virendra but Virendra assures her through his eyes.

When Neelam tells everyone about Rishi’s homecoming, Harleen urges her to praise Lakshmi but Neelam announces that Virendra is the one behind Rishi’s bail.

After Neelam walks away, Malishka notices Harleen and Ayush’s cheers and gets into a dilemma as she cannot figure out if she should be happy for Rishi or cry about Lakshmi’s achievement.

Meanwhile, Rishi notices Virendra embracing Lakshmi in a fatherly hug and joins them.

On the other hand, Guddu and Balwinder rob the hotel staff by scaring him with a knife.

Balwinder then takes the pen drive and runs away from there.

After Balwinder leaves, the hotel staff calls Mungesh to inform him that he still has the right pen drive.

Meanwhile, in Oberoi's mansion, Neelam orders Shalu to leave the kitchen as she is a guest.

Shalu then overhears Neelam ordering servants to help her with food supplies so she can make Rishi’s favorite food and gets happy.

© Copyright tellybest.com, 2022, 2023. All Rights Reserved. Unauthorized use and/or duplication of any material from tellybest.com without written permission is strictly prohibited.
Cached Saved on: Monday 21st of November 2022 05:10:51 AMCached Disp on: Tuesday 6th of December 2022 12:49:04 PM