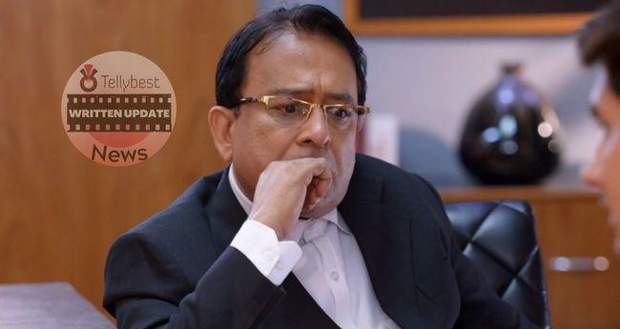 She voices her thoughts and points to Rishi about his praying when Dadi says he is doing this for Lakshmi.

Neelam gets jealous and annoyed and says again that Lakshmi is not good for the business.

However, Virendra defends Lakshmi and says that she will be proven innocent.

Neelam warns Rishi to maintain the reputation of the family as it was before and Rishi promises her to bring back the respect and soul of the house with him which he means is Lakshmi.

Meanwhile, in the cell, Lakshmi feels something wrong when Rishi’s ring is about to be dropped from her hand while simultaneously the light of the lamp goes off in the Oberoi mansion.

The Oberois are outside the court waiting for Lakshmi when they get to know the public prosecutor is Mr. Amod, who is a very reputed lawyer.

Uday, the reporter comes to Rishi and Neelam to ask their opinions on Lakshmi’s trial.

While Rishi shows his trust in Lakshmi and says she will be free after the trial, Neelam retorts to Uday over his rude questions.

She tells him that he should take care of his reputation since their hotel will get clearance after the trial.

Suddenly a squad of police comes and everyone wonders if this is for Lakshmi.

However, their misunderstanding is cleared once they find that this is a very dangerous terrorist named Munish.

As Munish crosses Ahana, she gets scared by his Aura even after he is chained.

Karishma accuses Lakshmi of doing the same thing as Munish that is trying to kill innocents while Ahana gets disappointed in her for comparing Lakshmi with a terrorist.

In the meantime, Shalu, Bani, and Rano arrive outside the court for Lakshmi and Aayush jumps straight beside Shalu which doesn’t get unnoticed by Rano and Karishma.

Suddenly Lakshmi arrives but gets surrounded by reporters while Uday begins blaming her for the evil accident and shocks Lakshmi by telling her that two patients are still critical.

Uday further brings into light a hypothetical reason for Lakshmi’s intent to bring the Oberoi hotel’s reputation down to take revenge on them for not treating her right.

Rishi yells at him for giving useless reasons even though others may have never thought that.

Uday only insults them on his camera while Shalu and Bani run to Lakshmi.

Dadi, Virendra, and Ahana give her strength to not lose hope while the police inspector asks the female constable to bring Lakshmi to the court for her hearing.

Lakshmi gets tensed but Rishi’s eyes console her.

© Copyright tellybest.com, 2020, 2021. All Rights Reserved. Unauthorized use and/or duplication of any material from tellybest.com without written permission is strictly prohibited.
Cached Saved on: Saturday 1st of October 2022 09:02:04 PMCached Disp on: Wednesday 5th of October 2022 05:19:02 PM