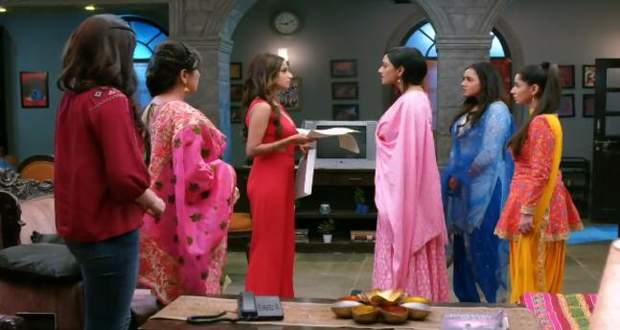 Today's Bhagya Lakshmi 7th April 2022 episode starts with Rishi being confident that Lakshmi will not sign the divorce papers.

Rishi mentions that the bond between him and Lakshmi is neither of friendship nor of marriage.

At the same time, Ayush makes an entry saying that Rishi shares a bond of love with Lakshmi.

On the other hand, Lakshmi comes out to meet Malishka who has arrived at her house.

Malishka hands over the divorce papers to Lakshmi and asks her to sign it quickly because she is late for dinner.

When Lakshmi refuses to sign the papers and says that she'll stay with Rishi, Malishka threatens to ruin her life if she doesn't sign.

Seeing that nothing is making Lakshmi sign the papers, Malishka tells Lakshmi that she has no place in Rishi's life.

Further, Malishka shamelessly tells Lakshmi that Malishka and Rishi have crossed all the boundaries in their relationship.

Lakshmi flashes through some past memories and agrees to sign.

When Malishka looks for a pen, Shalu takes Lakshmi to a corner and tries to stop her from signing.

However, Lakshmi tells her that she is confident that things will not be ruined even if she signs the divorce papers.

As soon as Lakshmi signs the papers, Malishka hugs Lakshmi.

Later, Lakshmi tells her sisters that Neelam and others believe that Lakshmi isn't Rishi's savior.

So, they won't let Lakshmi return to Rishi's life.

Meanwhile, at the Oberoi mansion, Rishi, Ayush, and Virendra get shocked to know that Lakshmi has signed the divorce papers.

When Rishi refuses to believe, Malishka shows Lakshmi's sign on the divorce papers.