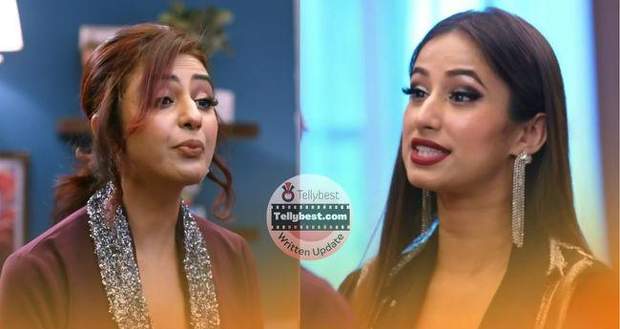 Today's Bhagya Lakshmi 7th December 2022 episode starts with Balwinder thinking about Sonal and worrying that Sonal might take away his business.

He does not want to lose Malishka's business as she pays well and he has become habitual to all those luxuries.

Meanwhile, Rishi asks Ayush to have a talk with Mr Reeves and messages him to join him.

On the other hand, Priyanka is talking to Laxmi when Malishka and Sonal come to them and asks Lakshmi to introduce them.

Hearing Lakshmi close to Malishka and Sonal, Priyanka praises her for being so comfortable with her husband's girlfriends while Lakshmi tells her that Rishi has never made her feel insecure.

Later, Lakshmi goes to the kitchen to get something while Priyanka tells Malishka and Sonal that she is a tarot card reader.

At Malishka’s request, Priyanka reads cards to Malishka and tells her that she will get married to her dream boy very soon.

Malishka gets very happy to hear that while Sonal tells her that her destiny has brought her there to get Malishka married.

Afterwards, Rishi tells him to work hard with focus and success will come to him in spades.

Meanwhile, Malishka and Sonal dance with joy in their room encouraging each other.

Seeing Malishka determined for Rishi, Sonal tells her that she will get Rishi at all costs.

After a while, everyone comes to dinner and Rishi introduces Sonal and Malishka at Sonal's request.

Later, Mrs Almeda is pleased to hear that Virendra treats his nephew like a son and that this kind of bonding is only found in India.

In the meantime, Kiran comes to Oberoi's house and looks embarrassed.

However, Neelam makes her feel comfortable and invites her to join them for dinner.

Meanwhile, Ashish is exercising and thinking about Sonal and why she is not reachable.

On the other hand, Malishka drops a spoon on the ground so that Lakshmi falls and drops all the food she is carrying.

However, instead of Lakshmi, the servant falls on the spoon and drops the bowl of Daal.

Seeing the spoon, Lakshmi asks Malishka why she did not pick up the spoon when it was in her sight.

Malsihka begins to argue trying to look innocent and portray Lakshmi in a bad light.

Later, Lakshmi apologises to Malishka to keep peace and tells her that she only did that because she saw the spoon there.

Ashish tells her that he is waiting for her invitation to come to him.

In the meantime, Shalu is thinking about Aayush not calling her while ironing and almost burns her hand on Bani’s warning.

Meanwhile, Bani teases Shalu for losing herself in Aayush’s thoughts while Shalu tells her that Aayush hasn’t called her the whole day.

Despite Bani’s suggestion to call Aayush herself, Shalu refuses to listen to her and on being further teased she runs after Bani to beat her playfully.

Elsewhere, Karishma suggests calling the hotel to order Daal as it will take time in cooking it.

However, Lakshmi comes there and tells her that she has made Kadhi which goes well with Rice.

Everyone becomes happy and praises Lakshmi while telling her that they all love Kadhi too.

Later, Rohan tells her wife he loves her despite the arranged marriage and asks Rishi how many times in a day he tells his wife the same.