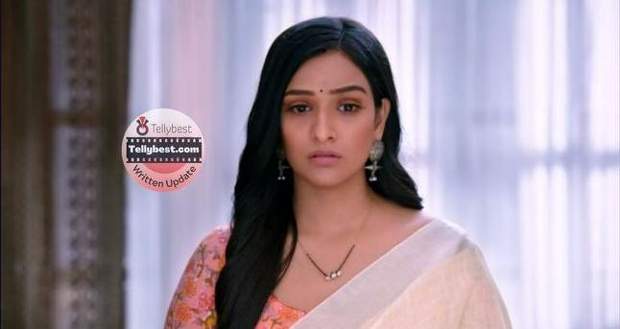 In between sobs, Lakshmi tells Shalu how Rishi has ruined Malishka’s dignity and due to this Malishka tried to attempt suicide.

Hearing this, Shalu gets into denial and tells Lakshmi that Rishi can never do this as he is married to Lakshmi.

However, Lakshmi informs Shalu that she has seen it with her eyes but Shalu replies that Lakshmi has misunderstood the situation.

Grabbing Lakshmi’s shoulder, Shalu firmly tells her that someone is the mastermind in all this which makes Lakshmi stare at Shalu with wide eyes.

Sonal tells Malishka that she stayed silent thinking Kiran will talk to Neelam about marriage but Kiran has different agenda.

With fuming anger in her eyes, Malishka tells Sonal that this time she will not let anyone ruin her plan of getting married to Rishi.

On the other hand, looking at his and Lakshmi’s marriage card, Balwinder grins and tells himself that he will throw this card at the pandit’s face.

He even tells himself that he will tell the pandit that Lakshmi is his wife so Rano’s plan of getting Lakshmi married will be spoiled.

He even says that if the pandit does not listen he will threaten him of abducting his children and this time he will make Lakshmi his anyhow.

In the meantime, pacing in his room, Ayush gets into a dilemma as he is sure Rishi cannot do this but Lakshmi can never lie whereas Shalu is also thinking Rishi can never do this.

At the same time, Ayush gets a call from Shalu who pleads with him to talk to Rishi about it.

Shalu further tells Ayush that now they know the reason so they need to find out who has created the misunderstanding.

Afterward, Shalu and Ayush both decide to go to the depth of this matter to prove Rishi's innocence.

Meanwhile, in Malishka’s home, while Malishka and Sonal are thinking about how they will convince Kiran, Kiran enters the room and tells them that they need to arrange Rishi-Malishka’s marriage soon.

Hearing this, Sonal and Malishka both get happy but Kiran announces that she wants Rishi to marry Malishka only if he loves her not by force.

When Malishka threatens to kill herself, Kiran announces that she will talk to Neelam soon about Rishi-Malishka’s marriage.

Sonal takes a promise from Kiran that she will make Rishi realize his love for Malishka.

Back in the Oberoi mansion, Karishma orders Ayush to search for Rishi while Virendra and Harleen angrily mutter that Rishi is feeling ashamed of coming back.

After Ayush walks away, Karishma begs Virendra to not throw Rishi out of the house for this.

Meanwhile, in Bajwa's house, Rano is busy decorating the whole house for the pandit's arrival and Lakshmi along with her sister obeys her orders.

Later, when the pandit arrives, he gets surprised to see the well-decorated house, Rano praises Neha for this and the pandit asks Rano if Lakshmi is the one looking at her.

Rano however informs the pandit that Neha is in her room and Bani goes to bring her.

In the room, Neha decides to come out without any proper makeup despite Bani's urging.

On the other hand, Ayush finds Rishi drunk under a tree.