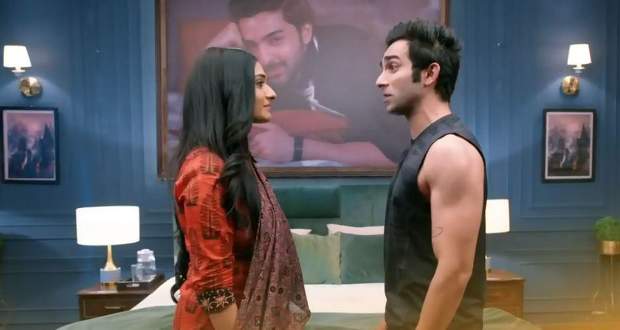 Today's Bhagya Lakshmi 7th July 2022 episode starts with Rishi telling himself that Lakshmi has tolerated a lot for his family and now he wants to clear Lakshmi’s image in front of his mom by getting the culprit's name from Balwinder’s mouth.

Afterward, he acts as if he wants to take a selfie but his phone’s battery is dead.

Seeing him like this, Lakshmi laughs to herself but Rishi then asks Lakshmi to give him her phone.

After a lot of conviction, Lakshmi agrees to take pictures with him.

However, Rishi urges Lakshmi to brush her hair and when Lakshmi goes to do so, Rishi quickly uses her phone to send Balwinder a text urging him to come.

Later when Lakshmi returns, Rishi pretends that he does not want to take any more selfies. He even asks her to go to sleep.

While lying down, Lakshmi and Rishi stare at each other romantically.

The next morning, while Lakshmi is informing Rishi that everyone is having breakfast in their rooms, Ayush happily arrives there.

He then cheers up Rishi and Lakshmi’s gloomy mood by announcing that he will do breakfast with them.

During breakfast, Rishi gets an SMS from Balwinder and he says that now the camel is under the mountain.

Hearing this, Lakshmi asks him who is he referring to.

To this Rishi replies that he means all the husbands are controlled by their wives.

Before Lakshmi can say anything, she notices two missed calls from the pandit ji and walks away from there.

After Lakshmi leaves, Rishi informs Ayush that Balwinder has planned to meet in a cafe.

At the same time, the Pandit ji informs Lakshmi about Rishi’s markeshdosh which is very strong for the next forty-eight hours.

Cutting the call, Lakshmi is very worried about Rishi’s well-being.

While Rishi and Ayush are discussing Balwinder, Ahana arrives there.

Seeing Ahana, Ayush lies to her that Rishi does not want to tell Lakshmi she has made breakfast very well.

After that, when Rishi and Ayush ask Ahana why she has not told them the truth, Ahana replies that she feels close to Lakshmi the most.

On the other hand, Balwinder tells Lakshmi’s photo that he will come for Lakshmi very soon.

He even looks at himself in the mirror that he will do everything for Lakshmi.

Later, while Lakshmi is cooking everyone’s favorite food, Ahana asks her if something has happened today.

© Copyright tellybest.com, 2022, 2023. All Rights Reserved. Unauthorized use and/or duplication of any material from tellybest.com without written permission is strictly prohibited.
Cached Saved on: Wednesday 25th of January 2023 12:25:26 PMCached Disp on: Sunday 5th of February 2023 01:57:27 PM