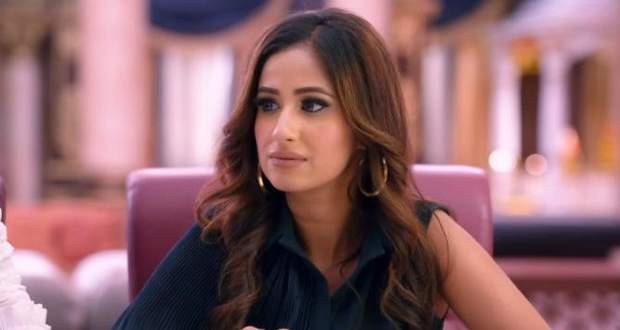 Today's Bhagya Lakshmi 7th June 2022 episode starts with Dadi asking Neelam if she can eat sweets while Dadi's doctor Shiv replies that she can have only two sweets.

At the same time, Rishi arrives there and starts chit-chatting with Shiv and Malishka also joins them.

Malishka then tells Lakshmi that she thought Lakshmi was in the kitchen.

To this, angry Lakshmi replies that Malishka is just seeking opportunities to get close to Rishi.

Meanwhile, Sudha and the Guzral family along with their son Gautam arrive there.

Sudha then introduces the Oberoi family and Gujral family.

Meanwhile, Malishka introduces herself as Rishi's fiance which surprises everyone.

However, Lakshmi also introduces herself and announces that she will bring Ahana.

Later she enters Ahana's room and encourages her with her soothing words.

In the living room, Ahana serves tea to everyone.

When Gautam compliments the tea, Ahana subconsciously calls Lakshmi her sister in law.

It surprises the Gujral family and they ask Lakshmi to introduce her husband.

Lakshmi tries to clear confusion by claiming that Malishka is just Rishi's friend but cunning Malishka confesses about Lakshmi and Rishi's divorce.

To change the topic, Dadi says that Ahana and Gautam should talk alone for some time.

Ahana and Gautam agree and leave the living room.

Meanwhile, in the kitchen, Lakshmi is not able to find the pasta anywhere.

Malishka goes to the room to taunt Lakshmi about it but Lakshmi calls her a thief for stealing the pasta.

Malishka tries to play cool by claiming that she will never do this kind of thing.

On the other hand, in Ahana's room, Ahana and Gautam converse with each other shyly and tell each other about their liking and disliking.

Lakshmi overhears Gautam confessing about his past relationship but walks away from there.

Later, Malishka and Karishma are discussing the Guzral family.

At the same time, Ahana tries to confess her past relationship but stops herself.

They come downstairs and tell everyone that they are ready for marriage.

Hearing this, everyone gets excited and Neelam tells Karishma to bring sweets for them.