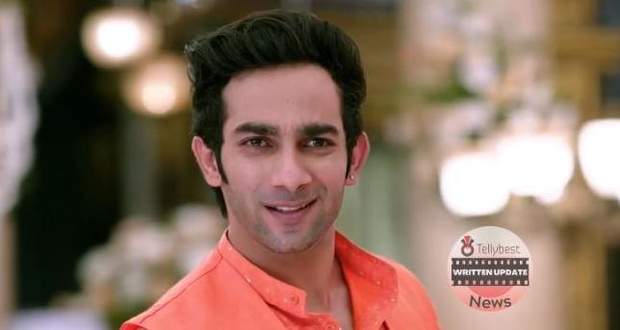 Today's Bhagya Lakshmi 7th November 2022 episode starts with Neelam looking at Lakshmi with fury in her eyes and signals her to talk with her.

Neelam taunts Lakshmi saying that today she has proved her mettle as a wife, and daughter-in-law, by breaking the fast.

Neelam further continues by saying that not only did Lakshmi break her fast, when instructed to not sit in the Pooja she didn't bother to pay heed, and then it was proved by her that she didn't in fact break her fast.

Neelam then finally accuses Lakshmi of concocting the whole plan, and because of her cunningness Neelam had asked to view the CCTV footage but nothing was found, as Lakshmi had flawlessly executed her plan.

Neelam commends her for playing the victim card and for making Neelam out to be the villain and tells her that Neelam will now play her real game which would really make her the villain.

Suddenly, Neelam hears Lakshmi singing a Bhajan and realizes that the entire conversation was in her head.

Meanwhile, Aayush, Virendra, and Malishka have all gathered around the laptop wondering if there is some footage missing.

Aayush and Virendra conclude that there is missing footage, while Kiran chimes in saying whether or not that is the case, it is proved that Lakshmi didn't break her fast.

Malishka instigates Virendra saying that Lakshmi might be playing the victim card. Aayush warns her to not say an ill word against Lakshmi and blames Malishka for being the perpetrator.

In the meantime, Rishi asks Neelam if she finds out who is the culprit to which Neelam responds with a yes.

Aayush cuts them off saying that the footage didn't reveal anything, but Rishi tells Aayush that Neelam knows who the culprit is.

Before Neelam could answer Rishi answers his own question and insinuates that it is Balwinder who could have done this as he is very devious, Aayush concurs with Rishi.

Meanwhile, Harleen comes up to Neelam and starts praising Lakshmi for her beautiful rendition of the Bhajans.

Karishma asks if the perpetrator was caught, and Ayush says that Rishi feels it's Balwinder but Lakshmi disagrees.

Harleen responds agitatedly asking if Lakshmi is blaming the family.

Harleen tells them to stop arguing and sends Lakshmi to rest. On the way to the room, Lakshmi feels dizzy and becomes unconscious.

Rishi picks her up and puts her on the bed when Aayush comes inside and sees Lakshmi unconscious.

Rishi recalls telling Lakshmi to not keep the fast while gifting her a saree when suddenly Lakshmi gains consciousness.

Rishi cares for Lakshmi and tries to convince her to break the fast.

Lakshmi argues saying lovingly that she is fortunate to keep the fast and they hug each other.

Meanwhile, Sonia stops Malishka from attacking Lakshmi and berates her and asks her to forget Rishi as Malishka always fails.

Malishka promises her that she will separate Rishi and Lakshmi.

© Copyright tellybest.com, 2022, 2023. All Rights Reserved. Unauthorized use and/or duplication of any material from tellybest.com without written permission is strictly prohibited.
Cached Saved on: Monday 21st of November 2022 05:18:11 AMCached Disp on: Wednesday 7th of December 2022 11:47:18 AM