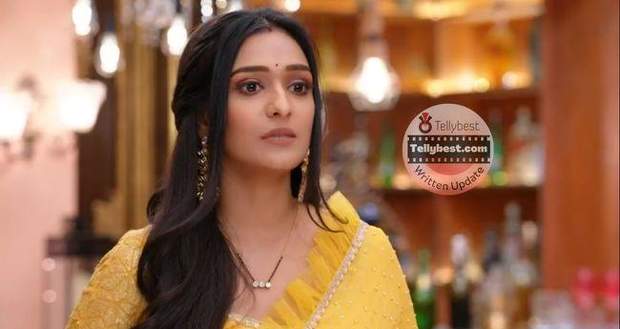 Today's Bhagya Lakshmi 8th December 2022 episode starts with Rohan asking Rishi how many times he has confessed his feelings to Lakshmi.

While Ayush thinks Rohan should continue this so Rishi should express his feelings to Lakshmi, Priyanka orders him to open his mouth only to eat.

Later, Mrs. Almeda informs Neelam that she is lucky to have such a sweet daughter-in-law as Lakshmi.

Hearing this, Neelam stays silent and Karishma whispers that till now Virendra always praises Lakshmi but these strangers don’t know how unlucky Lakshmi is.

Neelam then complements Priyanka for being a fantastic daughter-in-law while Rohan calls Priyanka his lucky charm.

To lighten everyone’s mood, Ayush announces that the party is not over yet as they will dance now.

Afterward, Neelam and Virendra surprise everyone with their dance and Priyanka urges Lakshmi to do a tarot reading.

At first, Lakshmi denies it by saying Priyanka should enjoy but when Priyanka informs her that she enjoys nothing more than doing tarot reading, she agrees.

However after Lakshmi chooses a card, Priyanka looks at Lakshmi with a worried expression.

Meanwhile, looking at Neelam and Virendra dancing, Sonal informs Malishka that she wants to see Malishka dance with Rishi just like this to which Malishka replies Rishi is standing very far away.

Sonal drags Malishka to the dance floor with a smirk and while they dance, Sonal brings Rishi there.

Seeing Rishi in front of her, happy Malishka starts performing with him and Lakshmi who is watching them from a distance mutters under her breath that now she is tense.

Priyanka then informs Lakshmi that big trouble is waiting for her which will impact everyone.

In the meantime, looking at Malishka and Rishi, Karishma remarks that they are looking very good together so they should marry off Rishi to Malishka very soon thinking Neelam is standing beside her but gets shocked when she finds Harleen there.

However, after informing Karishma that Lakshmi is perfect for Rishi, Harleen walks toward Lakshmi and orders her to dance with Rishi.

On one hand, Lakshmi is dancing with Rishi romantically; on the other hand, Sonal orders Malishka not to get upset now.

Meanwhile, Rishi questions Lakshmi why she is looking upset, and Lakshmi replies that she is just tired.

Rishi then urges Lakshmi to take some rest who replies that she is feeling happy seeing Rishi’s smile.

Looking at Lakshmi, Sonal tells Malishka that Lakshmi does not have much time left now.

Later, Mrs. Almeda praises Lakshmi for giving her such a pleasant time and Lakshmi urges Mrs. Almeda not to thank her since she has called Lakshmi her daughter.

Elsewhere, Kiran questions Sonal why she is not doing anything but Sonal announces she has planned something big.

Later, before leaving, Priyanka asks Lakshmi if she wants her to tell anyone in the family about her future but Lakshmi denies it while Sonal is listening to them from a distance.

On the other hand, Neelam and Virendra argue with each other about Lakshmi’s greatness and Neelam yells that Lakshmi will soon ruin this family.

Meanwhile, to cheer up Lakshmi’s mood, Rishi starts dancing with her.

© Copyright tellybest.com, 2022, 2023. All Rights Reserved. Unauthorized use and/or duplication of any material from tellybest.com without written permission is strictly prohibited.
Cached Saved on: Wednesday 25th of January 2023 12:43:31 PMCached Disp on: Wednesday 1st of February 2023 09:02:40 PM