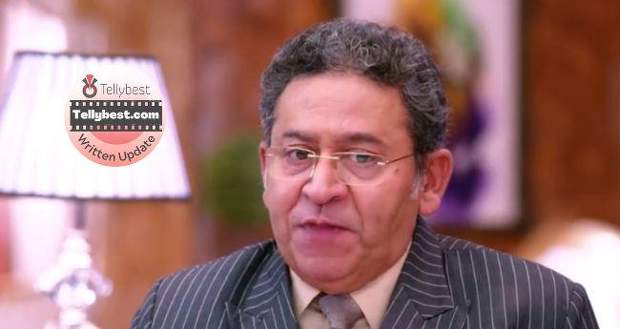 Opening his eyes, Rishi asks Ayush if he is here to give him an earful but Ayush tells him that he was worried for him so he came looking for him.

However, drunk Rishi starts muttering how he has hurt Lakshmi and she is not talking to him as she has seen him with Malishka on the bed.

Hearing Rishi’s depressing words, Ayush looks at him with pity and says that Rishi will never stoop this low.

This makes Rishi laugh sarcastically and he starts narrating that he has brought shame to Neelam and ruined Malishka’s dignity and broken Lakshmi’s heart.

On the other hand, in Bajwa's house, the pandit praises the groom by announcing that he has business abroad but only wants a traditional girl for himself.

This makes Rano very happy and she orders Bani to bring Neha to the hall.

Meanwhile, Rishi continues mumbling that he does not show anyone but he is deeply hurt.

Rishi even asks Ayush to give him some medicine who is watching Rishi with pity.

When Ayush announces everything will be alright, Rishi asks him how but Ayush urges Rishi to stand up.

Back in Bajwa's house, Neha tells the pandit that she has a degree and Rano also praises Neha for her beauty.

At the same time entering the home, Balwinder announces with a creepy smile that he is married to the girl.

Hearing this, the pandit stands up in shock and calls Rano a fraud but Balwinder clears that he is here for Lakshmi, Rano’s niece.

On the other hand, when Ayush asks Rishi to come home with him, Rishi refuses to go as there is no Lakshmi in the home.

Rishi further announces that Lakshmi was the one who protected him from every evil but now she is also gone.

Watching Rishi in such a state, Ayush feels his heart broken and he puts a hand on his shoulder.

Meanwhile, in Bajwa's house, Balwinder tells the pandit that he loves Lakshmi and even shows the marriage card to the pandit.

Balwinder continues his “Lakshmi is my wife”  song even when Rano and Shalu order him to close his mouth.

When Balwinder announces that he loves Lakshmi, Rano and Shalu throw him out of the house and the pandit yells that he will make Neha’s marriage happen only after Lakshmi gets married to this guy.

Rano tries to tell the pandit that Balwinder is just a roadside goon but the pandit announces that he will not take any risk.

The pandit even promises Rano that he will make Neha’s marriage in a rich family but first Rano needs to arrange Balwinder-Lakshmi’s marriage.

After the pandit walks away, Rano sits on the sofa with a thud while Neha expresses her excitement about the groom and how she will get the chance to live abroad.

Neha even begs Rano to arrange her marriage with this rich guy but Rano stays silent.

Back in the Oberoi mansion, everyone gets shocked to see Rishi in a such drunk state and Virendra expresses his disappointment in Rishi.

Back in the Oberoi mansion, Virendra and Neelam both tell Rishi that they are ashamed of having a son like him and Rishi begs Neelam not to say this.