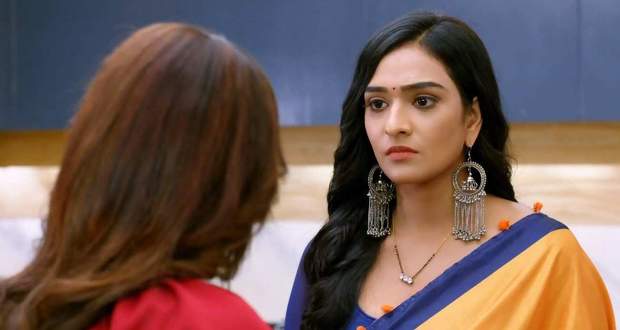 Today's Bhagya Lakshmi 8th June 2022 episode starts with Karishma expressing her concerns about Lakshmi to Neelam while hugging her.

She further asks Neelam to go to the kitchen with her.

Later in the kitchen, Neelam asks Lakshmi if she has lost her ingredients.

Hearing Lakshmi's excuses, Neelam accuses her of doing this on purpose to humiliate the Oberoi family in front of others.

While shouting, Neelam twists her ankle and Rishi along with Virendra takes her to her room.

After they leave, Malishka also accuses Lakshmi of being selfish.

Meanwhile, in Virendra's room, doctor Shiv arrives with Karishma and does Neelam's bandage while Neelam urges Rishi, and Virendra to attend to the guests.

Hearing Shiv's warning, Neelam stays in her room and Virendra assures her that everything will be alright.

She then specifically orders Virendra to behave strictly with Lakshmi and Virendra agrees to obey her.

Later in the kitchen, while Lakshmi is preparing Indian food for the guests, Ahana approaches her with a smile and expresses her liking for Gautam.

However, Lakshmi's happiness is interrupted by Ayush who starts shouting at Lakshmi for not being responsible enough.

On the other hand, Malishka is elated seeing Lakshmi getting humiliated by everyone and then she enters the kitchen to inform Ayush that she has already ordered her servant to make continental food for the Gujral.

When Lakshmi suggests bringing Indian food as well to the table, Ayush along with Ahana likes this idea and together they set the whole table for guests.

Meanwhile, in the living room, seeing Gujral family's hesitant faces everyone tells them to wait for a little bit as the continental food will arrive soon.

On the other hand, Karishma takes Lakshmi aside and scolds her again, Virendra also joins her and expresses his disappointment in Lakshmi.

However, Virendra's scolding gets interrupted by Gautam expressing his delight after testing Lakshmi's food.

At first, Gautam's parents are hesitant to try but after Gautam's persuasion they take a few bites and end up loving it.

Seeing the Gujral family enjoying their meal, everyone breaths a shy of relief.

Seeing everyone happy with Lakshmi again, Malishka's face falls and she angrily throws away continental food into the sink.

However, Lakshmi enters the kitchen and stops Malishka.