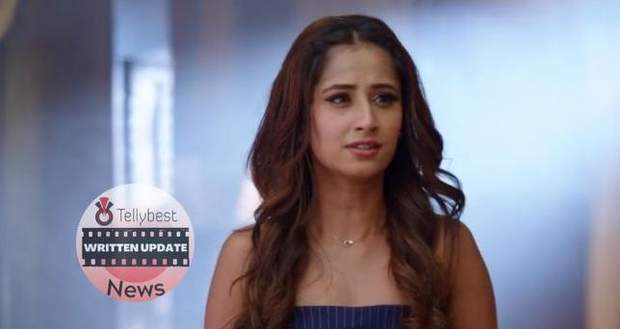 Hearing this, scared Malishka announces that she is ok but Ayush quickly questions her if she is pretending to get hurt.

When Malishka screams in pain, Ayush again asks her if she is okay.

Noticing Malishka nodding, Ayush sarcastically orders Malishka to leave the room so Rishi can have quality time with Lakshmi.

However, Rishi urges Malishka to stay if she wants but when Ayush asks Shalu to twist Malishka’s ankle again, she stares at him with wide eyes.

Ayush even proposes to carry Malishka in his arms but Malishka walks away.

After Ayush and Shalu walk away, Rishi pulls Lakshmi close and tells Lakshmi in a teasing voice to oblige Ayush’s order.

However, Lakshmi pushes Rishi away by ordering him to get ready quickly.

On the other hand, at the dining table, Neelam firmly announces that this year Rishi will do “Raavan Dahan”.

Hearing this, Harleen adds that indeed Lakshmi and Rishi will overcome this evil very soon.

Meanwhile, Rishi, Malishka, and Lakshmi join them at the dining table for lunch.

Rishi tries to deny but Neelam blackmails him by reminding him that he has promised to follow her every order.

Even Karishma adds salt to Lakshmi’s jealousy by announcing that Rishi and Malishka know each other for a very long time and they will get married in some time so they should not feel shy around each other.

However before Malishka can feed Rishi with her hand, excited Ayush informs, everyone, about the footage's arrival.

Hearing this, the food falls from Malishka’s hand and the color drains from her face.

Virendra then orders everyone to gather in the hall while Mungesh plays the video on TV.

When scared Malishka notices the video is only showing one part of the kitchen, she breathes a sigh of relief.

Noticing this, angry Ayush screams at Mungesh for not being careful enough but Mungesh informs them about the robbery.

He further adds that he will bring the whole footage quickly.

Later in the room, Malishka calls Balwinder and orders him to bring the footage to her.

Hearing this, Balwinder questions if the Oberoi family has no job except running behind the footage.

Malishka counters it by announcing that Lakshmi is the mastermind but Balwinder angrily tells her to stay away from Lakshmi otherwise he will kill Rishi.

On the other hand, while dropping Shalu near her house, Ayush and Shalu get into a catfight.

Afterward, Shalu tries to leave but her dupatta gets stuck on the bike and Shalu thinks Ayush has caught it.

When she notices it is the bike, she questions Ayush why he has not caught her dupatta much to Ayush’s amusement.

© Copyright tellybest.com, 2022, 2023. All Rights Reserved. Unauthorized use and/or duplication of any material from tellybest.com without written permission is strictly prohibited.
Cached Saved on: Monday 21st of November 2022 06:41:00 AMCached Disp on: Tuesday 29th of November 2022 12:33:01 AM