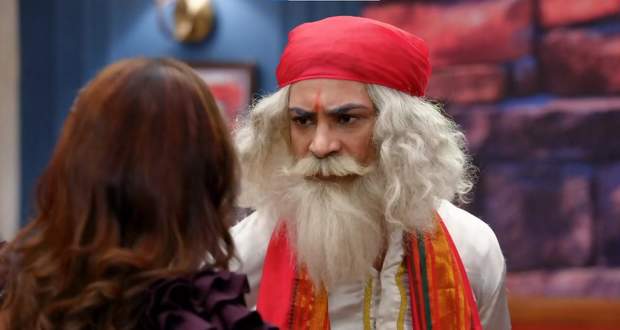 Today's Bhagya Lakshmi 9th August 2022 episode starts with Malishka worrying whether Balwinder will do his job or not while Kiran tells her that Balwinder is trapped here.

Further, Rishi and Lakshmi cut the cake with Harleen and celebrate Dadaji's birthday.

Lakshmi stops Rishi from eating the cake and tells him that elders should be served first after which everyone is given the cake one by one.

Later, Balwinder signals Malishka to talk to him and goes to a corner where he rebukes her for not informing him about Durga Devi being there.

However, she argues that she also didn't know about Durga Devi's arrival and gives him the next steps of the plan.

Malishka makes Balwinder leave the room but he again rushes inside and hides seeing Durga Devi coming their way with Aayush.

Afterward, Malishka tells Aayush to show Durga Devi another washroom as she's using this one.

Meanwhile, in the pooja, Shalu and Aayush are making faces at each other which makes Neha annoyed.

Malishka sits near Kiran and informs her of the conversation with Balwinder.

At the same time, the constables get a call from the police station and they leave while Durga also comes downstairs making Malishka think that she is leaving too.

However, Durga sits on a chair which makes both Malishka and Balwinder anxious.

Later, Lakshmi goes to bring the prasad while Neelam and Karishma smile at each other.

Further, when Lakshmi gives the prasad to Pandit, he points out the garlic in it and Neelam uses it as an opportunity to humiliate Lakshmi in front of everyone.

Karishma lies that Neelam had also made prasad just in case and goes to get it from the kitchen while Neelam tries to manipulate Harleen and get her against Lakshmi.

© Copyright tellybest.com, 2022, 2023. All Rights Reserved. Unauthorized use and/or duplication of any material from tellybest.com without written permission is strictly prohibited.
Cached Saved on: Monday 21st of November 2022 07:53:34 AMCached Disp on: Friday 9th of December 2022 07:20:48 PM