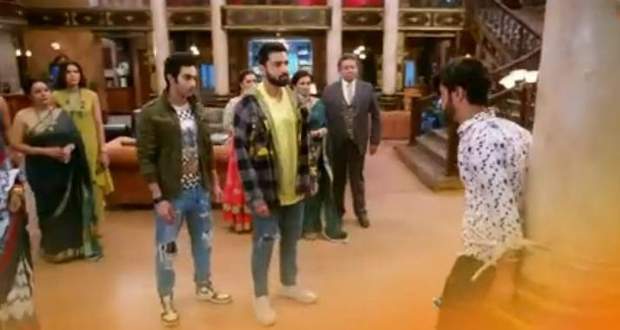 Today's Bhagya Lakshmi 9th July 2022 episode starts with Neelam thinking about what Rishi is doing for Lakshmi without telling her.

On one hand, worried Lakshmi decides to go in search of Rishi, and on the other hand, Neelam promises herself that she will teach Rishi a lesson today.

While informing about the weak signal, Ayush says that now it will be hard for them to locate Balwinder there.

At the same time, happy Balwinder buys a bunch of rose flowers for Lakshmi.

However, Balwinder's mood gets ruined after getting soaked by a fast-speed car.

After stopping the car, Rishi orders Ayush to disguise as Lakshmi.

Hearing this, Ayush gets frightened as he thinks he will lose his manly charm for it.

When Rishi says this is the only way, Ayush agrees to do so.

On the other hand, Lakshmi meets Shalu and they both decide to search for Rishi together.

Meanwhile, in the Oberoi mansion, Malishka and her shadow discuss their options about telling the truth.

After the shadow leaves, Malishka tells herself that she will beg forgiveness from Neelam for this mistake.

However, Neelam overhears it and asks Malishka about it.

While disguised Ayush is murmuring how Balwinder will stare at him with lust, Rishi calls him and orders him to stop overacting.

At the same time, Balwinder arrives there and seeing him Rishi orders Ayush to not get nervous.

Seeing the car, Balwinder starts dancing and approaches it slowly.

He even urges his janeman, Lakshmi to open the windshield for him.

Opening the gate, Balwinder is welcomed by Ayush’s smiling face.

However, during the fight, Balwinder overpowers Rishi and Ayush with the help of his friends and ties them together using the saree.

During the car driving, Balwinder orders Ayush and Rishi to stay silent or else he will slit their throat with a knife.

Later in Oberoi's mansion, instead of telling the truth, Malishka manipulates Neelam by sharing about her suffering.

It works because Neelam promises Malishka to always stay on her side.

© Copyright tellybest.com, 2022, 2023. All Rights Reserved. Unauthorized use and/or duplication of any material from tellybest.com without written permission is strictly prohibited.
Cached Saved on: Wednesday 25th of January 2023 10:09:11 AMCached Disp on: Thursday 9th of February 2023 07:40:50 AM