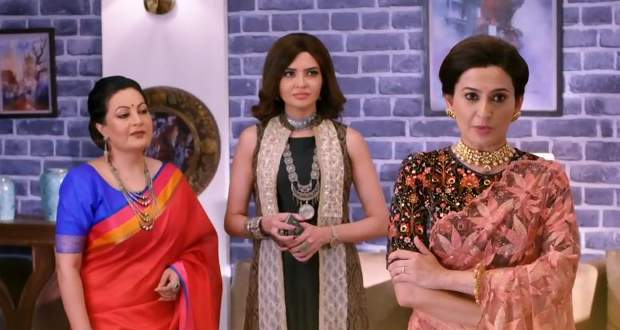 Today's Bhagya Lakshmi 9th May 2022 episode starts with Rishi finding out that Juhi has noticed a few beer cans and a sandwich plate.

Meanwhile, Lakshmi spots a stream of water flowing inside the cave.

Lakshmi suggests following the water flow and they try to find a way out along the water streaming.

After Rishi notices that the water stream is a dangerous path to get out of the cave, Lakshmi mentions that there is a hole on the cave's wall through which the resort's garden is visible.

On the other hand, Virendra sees Neelam being restless worrying about Rishi, and asks her to calm down.

Further, Neelam tells Virendra that she is trying to show that their marriage is perfect and also reminds him that the truth is otherwise.

Rishi breaks the surrounding wall of the hole with a stone.

As the hole is big enough for Juhi to escape, Rishi helps her to get out.

However, after Rishi expands the hole in the wall, the ceiling starts falling off and big rocks fall on them.

Seeing Lakshmi getting hurt because of the stones, Rishi covers her and lets the rocks fall upon him.

Lakshmi witnesses the care Rishi has for her and wonders why he never shows it in front of her.

Later, Rishi thinks that they should keep trying to escape from the cave.

Lakshmi asks him not to do anything because his time is not good because of Markeshdosh.

Hearing the mention of Markeshdosh, Rishi gets furious and starts scolding Lakshmi.

Further, when Rishi says that Markeshdosh cannot do anything to him and says that she is still alive, Lakshmi keeps her fingers on Rishi's lips to restrict him from talking about his death.

In the meantime, Juhi reaches the resort safely and calls out for help.