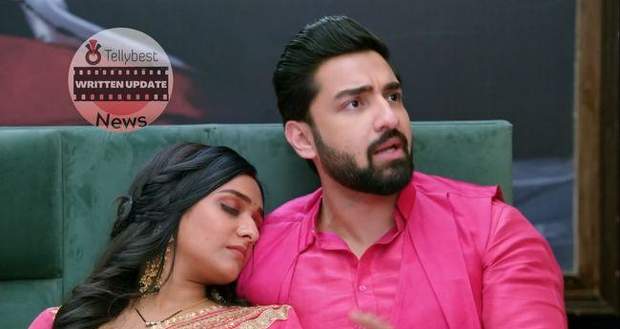 Today's Bhagya Lakshmi 9th November 2022 episode starts with Rishi murmuring that Malishka is becoming crazy and no one understands Lakshmi.

He then notices Lakshmi in the mandir and questions, Lakshmi, about what she is doing here right now.

Lakshmi informs Rishi that she is just collecting sindur and requests Rishi to put the sindur on her forehead.

Rishi questions Lakshmi if there is any vrat for her husband after putting the sindur on her forehead.

With love in her eyes, Lakshmi tells Rishi that husbands do vrat daily by respecting their wives and making others do the same.

Rishi asks Lakshmi if he follows the rules and Lakshmi nods happily.

She even calls Rishi her “Lakshmi Bhagya” and Rishi also tells Lakshmi that she is his “Rishi Bhagya” then.

Lakshmi then feels dizzy and Rishi urges Lakshmi to break the fast early.

Rishi even offers to feed Lakshmi when she mentions that she only eats after Rishi will feed something to her.

Seeing the care in Rishi's eyes, Lakshmi grins like a schoolgirl and announces that she will not break the fast.

Rishi then informs Lakshmi that he will meet her on the roof and he collides with Bani.

After quickly apologizing to Rishi, Bani runs to Lakshmi to inform her about Ayush and Shalu dating and Rishi overhears it.

On one hand, Lakshmi is not able to process the news; on the other hand, Rishi orders Lakshmi and Bani to come upstairs with him as Dadi wants to meet them.

Meanwhile, Rano is scolding the moon for not appearing in the sky but Virendra urges Rano to calm down.

Looking at Lakshmi and Rishi, Harleen yells that moon has appeared while Malishka rolls her eyes.

Virendra then tells Harleen that he has arranged a band to entertain people.

While everyone starts dancing to the beat of the dhol, Balwinder who has arrived at the Oberoi mansion dressed up as a dhol player gets mesmerized to see Lakshmi in a saree.

On one hand, Kiran gets shocked after recognizing Balwinder; on the other hand, Ayush feels suspicious of the dressed-up Punjabi dhol player aka Balwinder.

Kiran then approaches Balwinder to scold him for arriving here but Balwinder orders her to help as she does not have any choice.

Harleen then notices the moon in the sky and informs everyone.

On the other hand, while Balwinder and Kiran are discussing their plans, Ayush notices Kiran and starts walking toward her.

Before Ayush can see Balwinder, he walks away and Kiran pretends to talk to someone on call.

Meanwhile, seeing Lakshmi staring at Rishi through the sieve, Malishka feels jealous and runs away from there.

Looking at Lakshmi’s smile, lover boy Balwinder mutters that he can also break Lakshmi’s fast just like Rishi with lust in his voice.

Rishi calls Lakshmi Mrs. Oberoi and announces that he can feed her daily with love in his voice after puja which makes Lakshmi blush.

Balwinder however lights up the firecracker and it feels the area with smoke.

While everyone starts coughing, Balwinder kidnaps Lakshmi and runs away with her on his back.

© Copyright tellybest.com, 2022, 2023. All Rights Reserved. Unauthorized use and/or duplication of any material from tellybest.com without written permission is strictly prohibited.
Cached Saved on: Monday 21st of November 2022 04:20:15 AMCached Disp on: Thursday 1st of December 2022 12:34:41 PM