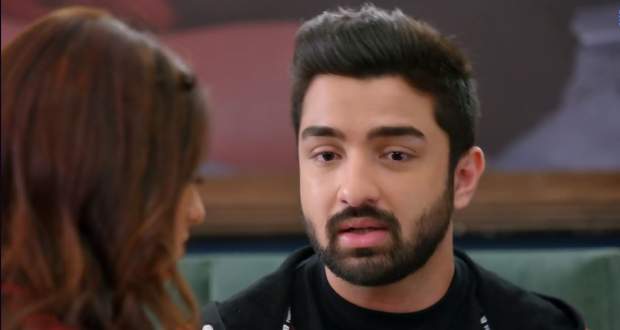 Today's Bhagya Laxmi 10th March 2022 episode starts with Rano getting shocked to see someone in her house and starts hitting them with a broom.

When Balwinder turns on the lights, Rano tells him that she had texted him that Shalu has gone to the Oberoi mansion with Lakshmi for dinner.

Seeing Rano's stupidity, Balwinder rebukes angrily by telling her that she has sent the message to Lakshmi instead of him.

To avoid the mess, Balwinder decides to go to Rishi's house to delete the message from Lakshmi's mobile before she reads it.

In the meantime, Lakshmi arrives at the Oberoi mansion with her sisters.

Malishka comes there and asks Lakshmi to get cleaned in the guest washroom emphasizing the word 'Guest' precisely.

When Lakshmi opens the door of the washroom, Rishi comes out of it.

Rishi and Lakshmi bump into each other.

When Lakshmi holds Rishi for support, both of them fall on the floor.

Further, Lakshmi asks Rishi to get up and let her go.

Rishi gets up and grabs Lakshmi closer while picking her up.

At the same time, Balwinder arrives there and feels revengeful seeing Rishi and Lakshmi.

Meanwhile, Malishka also comes there and witnesses Rishi and Lakshmi in an intimate position through the door.

Seeing Malishka, Lakshmi goes into the washroom and Rishi leaves the room.

In the meantime, Shalu and Baani come to know that all other members of the Oberoi family have gone out for some work.

At the same time, Neha arrives there and says that being Lakshmi's sister, she was also invited for the dinner.

On the other hand, Malishka and Sonia block Lakshmi's number from Rishi's mobile and Rishi's number's from Lakshmi's mobile.