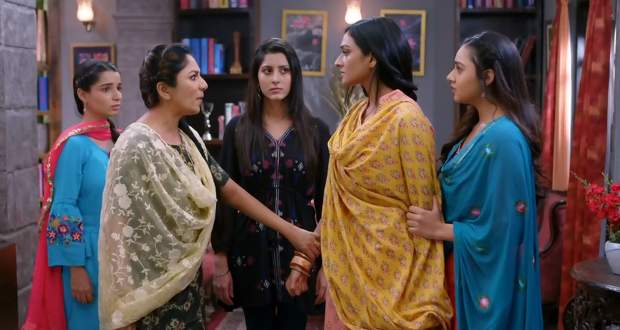 On the other hand, Rishi misses Lakshmi and feels guilty for the mistakes he has done.

Stopping Shalu and Baani from crying, Lakshmi says that she has separated from Rishi and she'll not be sad for something that is over.

The next morning, Rano drags Lakshmi out of the house to return to Rishi's house.

When Lakshmi says she is not going anywhere, Rano threatens to throw her out along with her sisters.

Meanwhile, Rishi talks to Ayush about his feelings. Rishi says that everyone is upset with him but no one wants to know what he feels.

Lakshmi offers to give rent for the room they stay in. Rano asks her whether she has got hold of a treasure.

Further, Lakshmi says that she'll find a job and pay the rent. Neha demands a huge amount as rent from Lakshmi yet Lakshmi agrees to pay it.

Rano warns Lakshmi that if she doesn't find a job in two days then she'll be thrown out of the house.

When Rano tries to speak more, Lakshmi says she does not have time to talk and needs to go find a job.

While leaving in search of a job, Lakshmi says that her heart is broken but her confidence has grown more.

In the meantime, Ayush explains to Rishi that Lakshmi is heartbroken and it was because of him.

Rishi says that he was guilty of his misdeeds but after what Lakshmi did to him at the temple, he can never forget it.

Upcoming Bhagyalaxmi episode updates: Neelam is warned by the Panditji that Lakshmi has to return back or else Rishi will be in danger.

© Copyright tellybest.com, 2020, 2021. All Rights Reserved. Unauthorized use and/or duplication of any material from tellybest.com without written permission is strictly prohibited.
Cached Saved on: Thursday 20th of January 2022 10:33:38 PMCached Disp on: Friday 21st of January 2022 05:31:27 PM