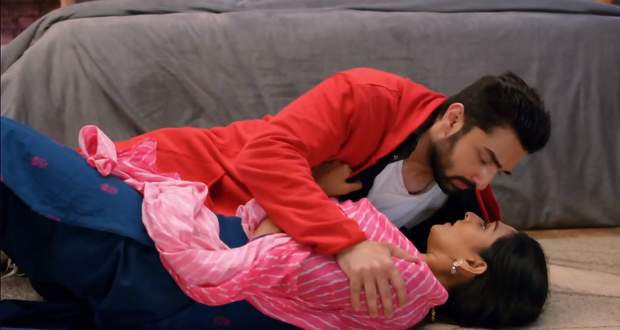 In the meantime, Lakshmi finds out that her mobile got replaced with Sonia's and tries to find her.

While returning with Sonia, Malishka slips and drops Lakshmi's mobile on the floor.

Balwinder takes the mobile, deletes Rano's message from it, and keeps it back.

Later, Sonia gives Lakshmi her phone back and asks them to come for dinner.

At the same time, Rishi comes there and says that he wants to talk to her in privacy.

Hearing this, Neha who was accompanying Lakshmi excuses them but before leaving asks for Lakshmi's mobile.

Neha checks Lakshmi's mobile but does not find Rano's message and informs Rano the same.

On the other hand, Rishi tells Lakshmi that he feels something odd that makes him restless.

As Lakshmi thinks that Rishi is suffering through the trauma of the incident at the bank, she says that he'll be fine soon.

However, Rishi explains that he is imagining things that are not true.

To make clear that he hasn't gone crazy, Rishi says that he sees Lakshmi all over the house even though she isn't there.

In the meantime, Balwinder sees Shalu near the dining table, and to execute his plan to kidnap her, he asks his friend to remove the fuse and turn off the lights.

When Balwinder finds the right opportunity in the scattered blackness, he assumes Shalu's position and covers her face with a cloth bag, and takes her away.

Meanwhile, Rishi sees Malishka walking in his direction with a torch and hides in a room with Lakshmi.