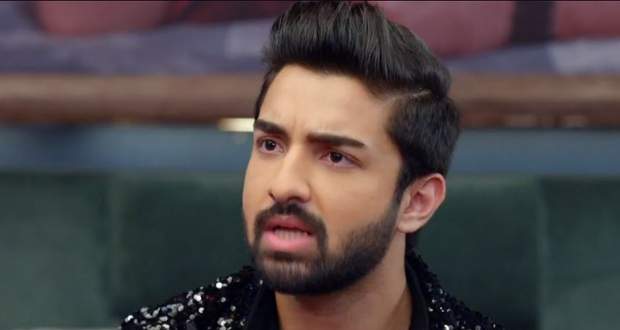 Further, Rishi screams at Lakshmi which makes Lakshmi sad and suddenly Rishi starts laughing as he was joking.

To get back at Rishi, Lakshmi lies to him that there is a snake in the room which makes Rishi jump up on the bed. Seeing this, Lakshmi starts laughing hard. They pull each other's cheeks and then Rishi goes to change his clothes.

Later, Ahana and Devika tease Rishi and Lakshmi but after they leave, Sonia gets angry with Devika and Ahana for trying to bring Lakshmi and Rishi closer.

After some time, Lakshmi comes after getting ready and Rishi stays stunned looking at Lakshmi.

Neelam calls everyone for pooja. Lakshmi tries to find Rishi but doesn't find him. Finally, Lakshmi spots Rishi and signs him to come for the aarti but he refuses to come.

© Copyright tellybest.com, 2020, 2021. All Rights Reserved. Unauthorized use and/or duplication of any material from tellybest.com without written permission is strictly prohibited.
Cached Saved on: Friday 21st of January 2022 04:45:25 PM