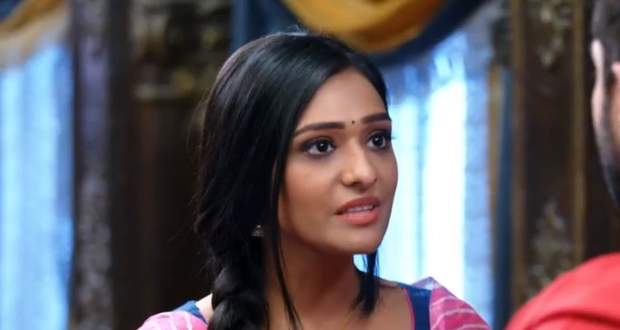 Today's Bhagya Laxmi 12th March 2022 episode starts with Rishi asking Lakshmi how did she change from Lakshmi to Malishka after she opened the curtains.

As the moment gets intimate, Rishi stays stunned.

However, Lakshmi asks Rishi she wanted to check how drunk he is because of the gibberish he is talking.

Further, Rishi tries to explain himself but before Rishi completes his statement, the servant comes there.

Meanwhile, Rishi tries to continue what he was saying but Lakshmi says that she should go back to her sisters.

However, Rishi stops Lakshmi by holding her dupatta.

As Rishi is unable to say what he intended to, Rishi asks Lakshmi whether she'll be his friend because it will help them know each other more.

After hesitating for a while, Lakshmi agrees but asks Rishi to take Malishka's permission.

When Rishi and Lakshmi shake hands saying friends, Kiran and Karishma witness them together.

Suddenly, Lakshmi hears Baani call and goes running to her.

At the same time, Balwinder arrives at his house with Shalu tied in a cloth sack.

When Rano comes there, everyone gets shocked to find out that Balwinder kidnapped Neha instead of Shalu.

In the meantime, the lights come back and Shalu tells Lakshmi that she was trying to scare Baani.

Further, Lakshmi gets a message from Rano to come home immediately.

So, Lakshmi leaves with her sisters without having dinner.

While Lakshmi walks away, Rishi recalls their moments together in the darkness and how Lakshmi accepted to be his friend.