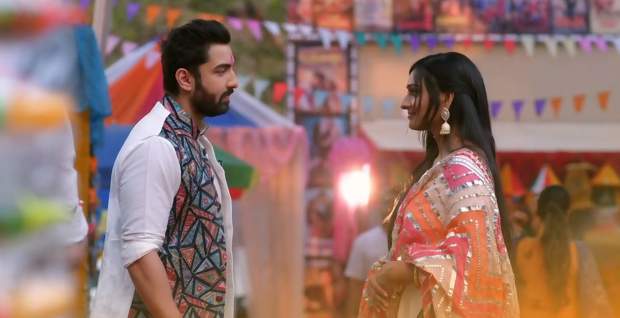 At the same time, Malishka arrives there and insists on accompanying them.

Though Rishi is not interested to do so, Malishka does not ask permission and joins them in the car.

On the way to the party, Rishi sees Lakshmi at the market and asks Ayush to stop the car in a flurry.

As Malishka is also in the car, Rishi makes an excuse of buying colors of the Lakshmi brand and goes to meet Lakshmi.

Rishi gets mesmerized by Lakshmi's looks and wishes her a happy Holi.

After Lakshmi wishes the same to Rishi, Rishi asks Lakshmi a stupid question that whether she is buying colors for Holi.

Sarcastically Lakshmi says that she is buying crackers for Diwali.

Meanwhile, Malishka notices that the market does not have any Lakshmi brand named colors and gets doubtful.

Malishka searches for Rishi and finds him standing with Lakshmi.

In anger, Malishka goes to them and says that they do not need colors from such a cheap market.

Before taking Rishi with her, Malishka purposely kisses Rishi in front of Lakshmi.

Lakshmi stays calm though her heart feels a tear.

In the car, Rishi asks Malishka why did she show such behavior but Malishka says that Rishi made her a fool to meet Lakshmi which is wrong.

On the other hand, the Holi celebration starts at the Kohlis with various performances dedicated to Golden Era as well as modern days.

Meanwhile, Balwinder is in the same market where Lakshmi is present.

Balwinder tells his friend that he wants to get hold of Lakshmi in any case.

After Balwinder leaves, his friend sees Sahana at the market and misbehaves with her by grabbing her hand.

Suddenly, Lakshmi comes there and slaps him for eve-teasing Sahana.

Impressed by Lakshmi's actions, Sahana invites Lakshmi to the Holi party at the Kohlis and takes her along.

Amalgamation of Bhagyalakshmi and Kumkum Bhagya

In the meantime, Rishi, Ayush, and Malishka arrive at the Holi party where Malishka keeps introducing herself as Rishi's would-be wife.

However, Ranbir Kohli notices something odd in Rishi's behavior and takes him to a corner.

Ranbir confronts Rishi that he has noticed that Rishi does not love Malishka and he should only marry the person he loves.

As Rishi is trying to convince himself that he loves Malishka, he says the same to Ranbir and leaves.

At the same time, Ayush comes there and tells Ranbir that he is right in understanding Rishi's heart.

Ayush says that Rishi loves Lakshmi by heart but he hasn't realized it yet.

Malishka and Rhea team up

After some time, Malishka and Rhea decide to be the first to play Holi with Rishi and Ranbir respectively.

Later, Malishka applies color on Rishi's face and runs away.

Rishi takes a plate of colors in his hand and accidentally bumps into Lakshmi.

The plate hops in the air showering the colors on Lakshmi and Rishi.

Further, when Lakshmi tries to walk away saying Malishka must be looking for him, Rishi grabs her hand and stops her.

Rishi insists on applying color with his own hands.

Holding Lakshmi close to him, Rishi romantically caresses through Lakshmi's cheeks coloring them with the colors of the festival.

Lakshmi keeps her eyes closed as Rishi moves his fingers along her jawline.

Malishka sees that Rishi played with colors with Lakshmi before her and gets upset.

Later, Malishka's anger grows when Rishi splashes water on Lakshmi with the water gun instead of Malishka.

When Ayush meets Lakshmi and they apply colors to each other, Rishi comes there and fills Lakshmi's face with colors again.

While everyone enjoys the Holi festival, Balwinder arrives there hiding his face with colors so that no one recognizes him while he plays Holi with Lakshmi.

However, Balwinder and Malishka are left in devastation as Rishi stays around Lakshmi during the whole party.