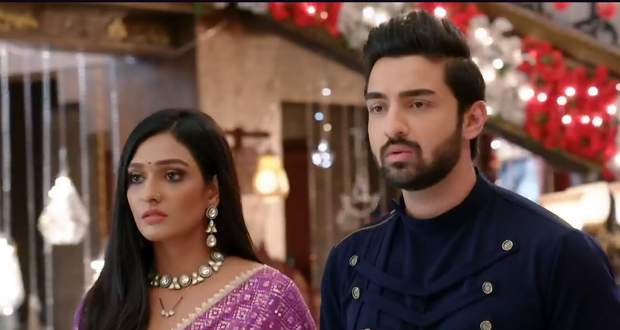 Today's Bhagyalaxmi 13 November 2021 episode starts with lights going out at the Oberoi mansion.

Everyone will be worried but Lakshmi puts diyas everywhere and says that darkness won't enter their house.

At the same time, a diya starts blowing out because of the breeze. Lakshmi tries stopping it from blowing out and asks for Rishi's help.

Seeing Rishi help her out, Virender tells Ayush that no one can stop Rishi from helping Lakshmi. The one who could stop that is Malishka is gone from their lives.

Malishka introduces Viraj to everyone. Rishi recognizes him as they used to be in the same school.

Further, while talking to everyone, Lakshmi feels dizzy. Rishi helps her and takes her to sit down and take a rest. Malishka sees this and gets angry.

On the other hand, Shalu sees Ayush and starts teasing him. Ayush puts his leg on Shalu's leg purposely.

Shalu loses her balance but Ayush stops her from falling by holding her. They romantically look into each other's eyes.

Later, Viraj will be talking to Malishka but she will be busy watching Rishi giving his attention to Lakshmi.